Arsenal manager Unai Emery has confirmed that both Laurent Koscielny and Sokratis will return earlier than expected after they were forced off during the FA Cup Fourth Round clash against Manchester United.

Summer signing Sokratis limped off midway through the first half after appearing to twist his ankle in a challenge against Alexis Sanchez, whilst Koscielny suffered a jaw injury after a stray boot from United striker Romelu Lukaku. 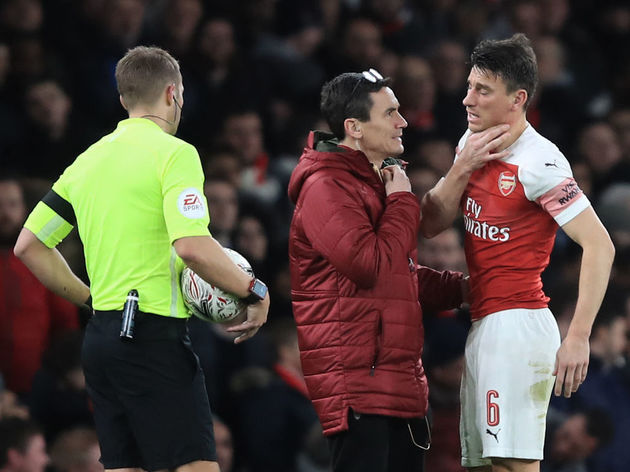 After initial concerns that the Greek defender would be ruled out until the end of February, and centre-back partner Koscielny had broken his jaw, Emery provided a positive injury update on the duo.

He said (as quoted by the ​club's official website): "Koscielny and Sokratis are not OK for tomorrow. But it is good news for example for Laurent Koscielny because he didn't break his jaw.

"Sokratis doesn't have a big injury but he isn't OK [to face Cardiff], I don't know how long but I think maybe two or three weeks." An update on ​Arsenal's website added further detail about the extent of Koscielny's injury, which reads: "Bruising and soft tissue swelling to face and jaw. Being reviewed on a daily basis."

With the side in the midst of a worsening injury crisis, particularly in defence, Emery was quick to point out that Konstantinos Mavropanos' return from a lengthy lay-off has given him an extra option at centre-back.

The ​Arsenal boss added: "Mavropanos has been working with us for the past month and has playing with the under-23s. He is in the squad with the possibility to play.