Paris Saint-Germain superstar Neymar has been ruled out of both legs of the French side's Champions League last 16 tie against Manchester United, according to reports from France.

The Brazilian was forced to limp off the pitch during PSG's French Cup clash over Strasbourg last Tuesday, and it was initially hoped that he would only have to miss the first leg against United next month. 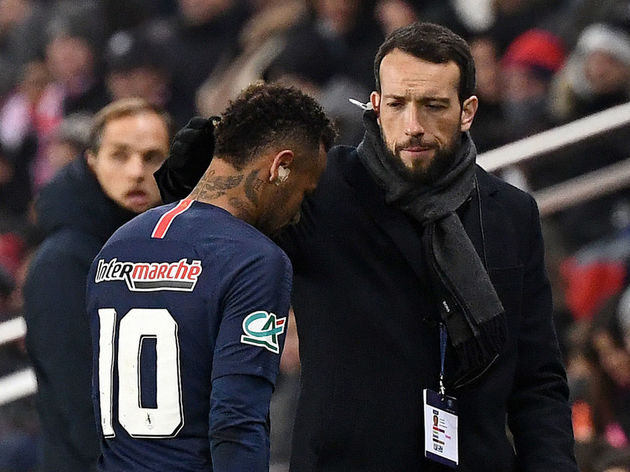 However, French publication ​L'Equipe now report that the world's most expensive footballer will remain on the sidelines until at least the end of March after injuring a metatarsal in his right foot.

The report adds that additional MRI scans have shown that Neymar suffered a fracture, and that there was now a '90 per cent' chance of the former ​Barcelona star requiring surgery, which would all but rule him out for the rest of the season.

PSG face ​United at Old Trafford in the second week of February, with the return leg at the Parc des Princes scheduled to take place on 6 March.

32 - Neymar  has scored 32 goals in 33 games in Ligue 1 with Paris, becoming the fastest player to reach this tally in the French  top-flight in the last 45 seasons. Monster. pic.twitter.com/5mYzGfQwxY

Neymar's reported length of absence would mean that it is now unlikely the 26-year-old will make an appearance in either game, with concerns now over whether he will make it back before the end of the current campaign.

Earlier, PSG boss Thomas Tuchel confirmed that an early return for Neymar would be 'very difficult'.

He said (as quoted by ​Sky Sports News): "It's going to be very difficult, that is clear. I do not have confirmation of a new diagnosis. As I explained yesterday [Saturday], it's too early to talk about a return date. "We have to wait for the first week, which is very important, and its reaction to treatment. Only after that can we be more precise, but it's going to be very difficult [for the United match].