PSG had been widely suggested as one of the clubs in the running to sign Dutch sensation De Jong, but the 21-year-old completed a £74m switch to the Camp Nou instead.

Philippe Coutinho told he's "not what Barcelona thought they were getting"https://t.co/S3ULSE830T pic.twitter.com/1YSzSubBkO

With the Parisians having missed out on one of their primary transfer targets, the ​Mirror suggest that the Parc des Princes outfit will now target Brazil superstar Coutinho in a move of ‘revenge against ​Barcelona'.

The report notes suggestions from Spain that PSG are ‘furious’ at having failed to land de Jong, with sporting director Antero Henrique even facing the sack for having missed out to Barcelona.

It is the latest instalment of drama between the two European superpowers, after PSG lured ​Neymar away from Catalonia in 2017.

Barcelona effectively signed Coutinho to replace the Brazilian attacker last January, but it is now suggested that PSG could look to pair the South American duo together at the Parc des Princes.

The French champions are apparently eyeing such a move in ‘retaliation’ to Barca stealing a march on them to secure the signing of de Jong, with ​RMC journalist Daniel Riolo suggesting that the Parisians are set to commence a ‘commercial war’ with Barcelona.

Former ​Liverpool hero Coutinho is now said to be at the centre of the ongoing feud, having struggled to cement a regular place in Ernesto Valverde’s starting XI at the Camp Nou this term.

The Brazilian, 26, has a €400m release clause in his contract with the La Liga champions, which is due to run until 2023.

​Manchester United have also been touted as potential suitors for Coutinho, though the Red Devils would face stiff competition from the financial muscle of PSG. 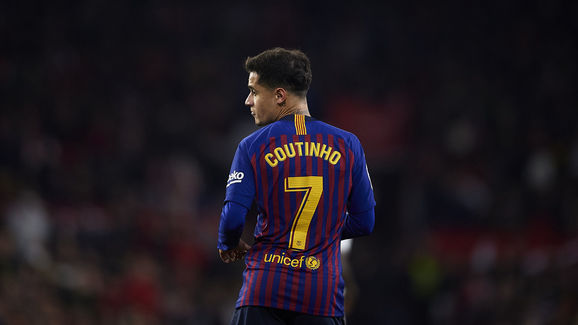 However, it is suggested that the Ligue 1 side’s strained relations with Barcelona could see the Catalan side prefer to sell to the Premier League outfit, should they decide to offload the Brazilian in the coming months.