Napoli qualified for the Coppa Italia quarter finals on Sunday evening, as they beat Sassuolo 2-0 at the Stadio San Paolo.

Arkadiusz Milik opened the scoring after 14 minutes, as Sassuolo goalkeeper Gianluca Pegolo failed to clear the ball and instead pushed the ball right into Milik's path, who duly bundled it home.

Sassuolo thought they had equalised in the 35th minute, courtesy of a fantastic finish from

Manuel Locatelli. However referee Federico La Penna controversially ruled the goal out after a VAR review, as he deemed Locatelli to have handled it in the build up to the goal.

Napoli finally doubled their lead 16 minutes from time, as Milik pulled the ball back to Fabian Ruiz who finished emphatically to send the Partenopei through.

The result sees Napoli progress to the quarter finals of the Coppa Italia, where they will travel to Milan on 30 January. 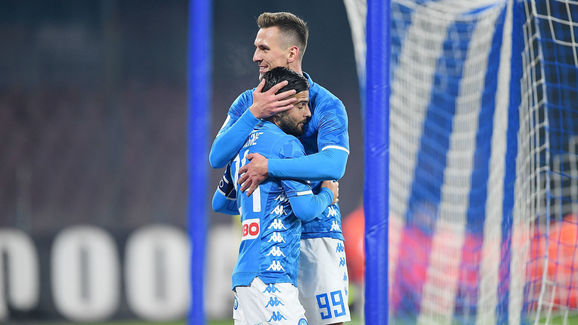 Napoli did look shaky and sloppy in the first half, with misplaced passes scattered around their performance. However they eventually settled down and took control of the game, as they began to truly hit their stride as the game went on.

Although it could've been completely different with Sassuolo's disallowed goal, the Partenopei looked strong overall and were fluid going forward. They will be pleased with their progress in a deserved win, as they look to win the trophy for the first time since 2014. STAR MAN - It was Arkadiusz Milik who made the difference on Sunday night, as he got a goal and assist for Napoli. He was involved in every move for the Partenopei, holding the ball up brilliantly and combining with Lorenzo Insigne very well to help his side to victory.

WORST PLAYER - You could argue that Mario Rui was lucky not to be sent off, as a rash challenge saw him only receive a caution when he was on a yellow card. Although he was far from awful, at times he was rash and committed a few tough challenges throughout the game. Sassuolo started the game very well, creating good chances and moving the ball well. However as soon as Milik gave the hosts the lead, Sassuolo lost control as it all seemed to break down a little.

The Neroverdi seemed to lose confidence, and from then on they seemed cautious to move the ball, worried to lose possession and occasionally looking uncertain when in possession. They were unlucky not to equalise, and although they improved it was too little too late for Sassuolo. STAR MAN - Manuel Locatelli was the man who offered the most for Sassuolo, scoring their only goal despite it being disallowed. He caused trouble for the Napoli defence throughout the game, and had a number of good chances which turned out to be his side's best opportunities.

WORST PLAYER - Playing at Sassuolo's striker on the night, Kevin-Prince Boateng didn't impact the game as much as he'd have wanted to. He lost the ball on several occasions and didn't really offer the Neroverdi anything going forward, being brought off in the second half. Napoli return to Serie A action next Sunday, when they host Lazio at the Stadio San Paolo. They then take the long trip up north, when they face Milan on 26 January.

Sassuolo start their second half of the league season with a trip to San Siro, as they travel to ​Inter next Saturday. They are then back at home on 26 January, hosting Cagliari at the Mapei Stadium.