Federico Bernardeschi opened the scoring for La Vecchia Signora in the ninth minute, following a mix-up between keeper Angelo da Costa and

The hosts were on the back foot from the first whistle, but showed some signs of promise going forward, although complacency from their more illustrious opponents had contributed to their rare glimpses of attacking potential.

However, after Da Costa's error allowed Bernardeschi to give the visitors the lead, the home side were forced back to the drawing board, which actually worked in their favour, as they established a better shape and eventually went close on the stroke of half time. The Rossoblu took confidence in the fact that they went into the interval by just a goal down and initially used a more direct approach from out wide. However, all their momentum was ended after an unfortunate ricochet allowed their opposition to double their lead through Kean, which ultimately brought an end to the contest.

STAR MAN - There weren't many bright sparks in Bologna's side, but Erick Pulgar put in a decent shift. He won possession in key areas of the field and looked to set his side up on the counter-attack. He went for goal on a few occasions, and although they didn't hit the target, it was positive for the Rossoblu.

WORST PLAYER - Despite a much improved display in the second half and a couple of decent saves overall, Da Costa's error in the ninth minute ultimately proved costly and set his side up for defeat. It's difficult to come from behind against any side and an even more challenging task against the likes of Juventus. 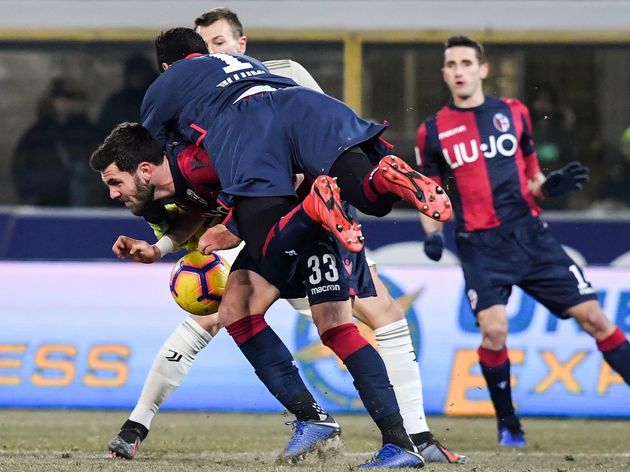 Cross-field passes are never easy for keepers, but the Bologna stopper should have taken the ball and left nothing in his wake, after he clattered into teammate

The ​Bianconeri fielded a relatively 'weakened' side, with five of their usual starters on the bench. However, despite the inclusion of a few fringe players, the holders found no difficulty going The side from Turin created further opportunities in the opening 45 minutes, hoping to bring the tie to an early end, but couldn't make the most of their chances, with Leonardo Bonucci thwarted by Da Costa, who had improved since the error.

Yet, La Vecchia Signora managed to get the decisive second within minutes of the restart through Kean, who followed up after Douglas Costa's effort was blocked. Juve were on top thereafter, but they controlled the game and were more concerned with keeping their opponents at bay.

STAR MAN - ​Douglas Costa may not have been on the scoresheet, but the winger performed terrifically on his rare start for the side. It is always important for players to express themselves when given the opportunity and the Brazilian certainly did that against Bologna, displaying mesmerising skills and showing a clean pair of heels to the likes of Mitchell Dijks and Danilo. He was also involved in the decisive second goal, as his effort was blocked and ricocheted into the path of Kean, who made it two.

WORST PLAYER - De Sciglio may have been involved in the build-up to Juve's opener, but he didn't contribute to much after that. He was caught out of position on a few occasions and the Bologna players got some joy down his side, although they lacked the quality even when they managed to get the better of him.

Next up for Bologna is a trip to 16th-placed SPAL in the league, as the Rossoblu search for their first Serie A victory since September.

Meanwhile, Juventus face ​Milan in the Supercoppa Italiana in midweek, before hosting bottom-side Chievo in the league.