Fernando Llorente's hat-trick helped Tottenham on their way to a 7-0 demolishing of Tranmere Rovers in the FA Cup third round on Friday.

​The first chance of the match fell to Heung-min Son after Tranmere Rovers captain Steve McNulty gave away possession in midfield, presenting Son with a one on one chance, but the South Korean was thwarted by Scott Davies.

Lucas Moura was next to miss a gilt-edged chance for the visitors on 13 minutes. Tranmere tried to play the ball out from the back and ​Son pounced to lay the ball off for Moura, but his tame shot in the box was easily collected by Davies. 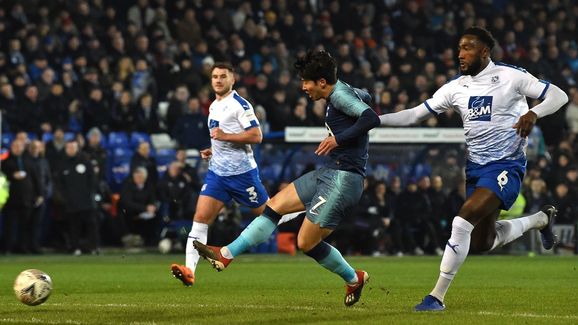 After Fernando Llorente was denied a penalty by Andre Marriner for a shirt pull in the box, Tranmere grew into the game and had their first meaningful effort in the 25th minute. Top scorer James Norwood beat the offside trap and drove an effort well wide from a tight angle, when he should have squared it to Jay Harris.

Manny Monthe drew a routine save from a corner not long after, as Tranmere's high pressing offered the League Two side and their supporters encouragement. However, the deadlock was broken as Tranmere failed to clear a corner and Serge Aurier, from 25 yards, bent an excellent effort into the top corner with the outside of his right foot. 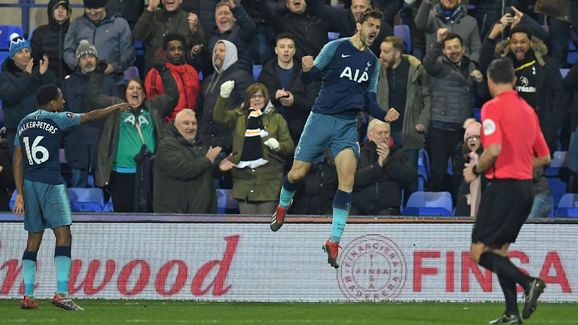 Son beautifully controlled a long ball forward and played in Aurier to finish low and grab his second of the match. The game was well and truly dead just two minutes later as Son got the goal his performance deserved on 57 minutes, running from his own half before drilling across Davies in the Rovers goal to continue his outstanding form.

As Tranmere tired, the Tottenham floodgates opened and Llorente's quickfire double saw them race into a six goal lead and earn the striker his hat-trick. Oliver Skipp found the Spaniard with a brilliant through ball, that Llorente calmly slotted away on 71 minutes before he added his third a minute later with a neat finish.

A rampant Spurs continued raining goals as ​Harry Kane, introduced for Llorente, beautifully flicked over the onrushing Davies for the seventh.

Son yet again showed his class with a brilliant all round display to send Tottenham into the fourth round draw and avoid any potential cupset, no matter how unlikely. The South Korean is set to head of to the United Arab Emirates to play in the Asian Cup, meaning Tottenham's next Premier League home match against Manchester United will be his last before the tournament.

12 - Son Heung-Min has been directly involved in 12 goals in his last six games for Tottenham in all competitions (7 goals, 5 assists), as many as he was in his previous 31 combined prior to this. Form. #FACup pic.twitter.com/02nDoouJgR

Player Ratings
Starting XI: Gazzaniga (7); Aurier (8), Foyth (7), Sanchez (7), Davies (7), Walker-Peters (7), Skipp (7), Alli (8), Moura (6), Son (9*), Llorente (9)
Substitutes: Marsh (7), Kane (8), Eyoma (6)
Star Man - Heung-min Son
Llorente deserves credit for his three well-taken goals but Son showed his class once again with brilliant cameo. His touch, awareness and speed terrorised the Tranmere defence and they would have been relieved to see him replaced on 65 minutes.
Son is having his best season in a Spurs shirt to date and both he and the Tottenham fans will be disappointed to see him jet off the United Arab Emirates after the next couple of matches.
Worst Player - Lucas Moura
Tottenham were utterly dominant against a spirited Tranmere side, but Moura was the pick of the bunch having failed to capitalise on Spurs' goalscoring exploits. He missed a good chance in the first half to put his side in front, and didn't quite showcase his normal lively, energetic self.
Looking Ahead
Tottenham host Chelsea in the first leg of their Carabao Cup semi-final on Tuesday before they return to ​Premier League action the following Sunday to take on Manchester United.
Related Topics:
Transfer News