As he does with the vast majority of his tweets, Christian Eriksen has been concluding his recent public announcements with the hashtag #coys at the end, wielding the famous slogan used by the club's supporters.

But then again, so did Luka Modric at one point. It is time for the play-making genius to stop hammering away at his keyboard and pick up a permanent marker to ink his name in the annals of Tottenham history, and here is why.

The Danish magician is having a season to remember with the north London giants, scoring four goals in the league and assisting seven more​. In fact, Eriksen has contributed to nine goals in his last nine league appearances and is in the form of his life. His goal against Cardiff means he has now contributed to 100 Premier League goals for Spurs - a feat only five other players can boast.

Only six players have been directly involved in 100 Premier League goals for Tottenham:

However, with his contract set to expire in the summer of 2020, ​Eriksen is starting to weigh up his options and consider whether ​Tottenham Hotspur is still the place for him.

He is into his sixth season at the club now and has barely had a whiff of silverware, competing in a solitary League Cup final - losing out to Chelsea on the day.

So, why should he stay?

Well, barring maybe Manchester City and Liverpool, it would be hard to argue the fact that Tottenham are the league's most exciting prospect at the moment. Though the squad's depth may be found wanting, their star-studded starting XI is one of the best in Europe, their manager has been lauded as one of the foremost managers in world football by colleagues and counterparts alike, and to top it all off they will soon be moving into one of Europe's most advanced stadiums. Not convinced?

They are, without doubt, one of the best teams currently playing on English soil. This is an appealing prospect for any player, even in the absence of trophies in the cabinet.

Though there may be some speculation over the future of Mauricio Pochettino, his best players have all tied themselves down to lengthy contracts. ​Harry Kane and ​Dele Alli have both committed their future to the club until at least 2024, whilst ​Heung min-Son has signed until 2023. If it is more money Eriksen is after, he just has to look at his team mates' new lucrative contracts to find out that caution has been thrown to the wind with Daniel Levy's famous tight wage structure.

With Eriksen undoubtedly being one of Spurs' most influential players, he is in the position of almost setting his price to Daniel Levy, who has, as reports suggest, offered to double the Dane's current wage package.

So, Eriksen will double his income and rub shoulders with some of the world's best players for many years to come; but what about trophies?

Ultimately, this current crop of incredible Tottenham players will either be remembered as the 'nearly men' or one of the greatest Spurs sides in history, should they manage to bring silverware to the trophy cabinet. Granted, they haven't won a trophy in over a decade now, but surely this team is too good not to win a trophy sooner or later. 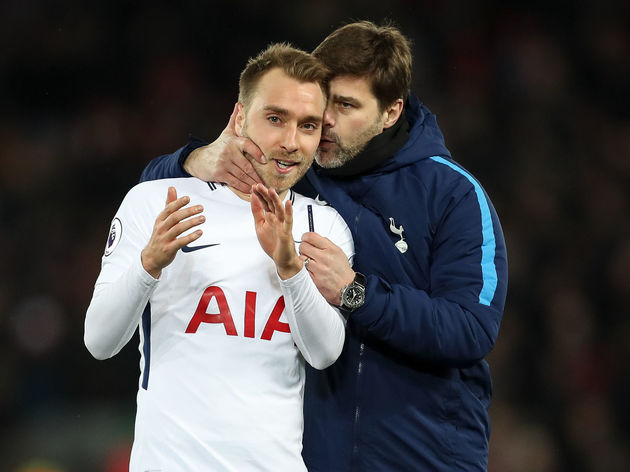 Speculation, I understand, over whether a team is good enough to win trophies, does not, in fact, win you trophies, and Eriksen cannot be promised silverware in blue and white should he stay. However, after fighting off interest from Manchester United early on in his Tottenham career, why would the Dane suddenly decide now is the time to move on, when he is currently playing at one of the most elite clubs in the land?