Juventus are reportedly interested in signing Arsenal midfielder Aaron Ramsey in the January transfer window, and could offer the Gunners Sami Khedira in an attempt to sweeten the deal.

Ramsey’s contract expires at the end of the season, with the Gunners eager for him to stay until the end of the agreement. However, Juve want to sign him as soon as possible, as other European clubs wait in the wings. 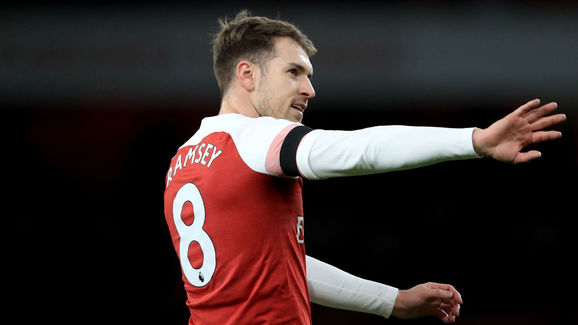 As reported by Calcio Mercato, the Italian champions will attempt to sign him by the end of the month, subject to them reaching an agreement with Arsenal before the January transfer window closes.

Juventus sporting director Fabio Paratici ​confirmed the club’s interest in ​Ramsey on Wednesday, although the Bianconeri have been interested and linked with the Welshman for a while now.

​Arsenal are reported to be willing to let the 28-year-old leave in January, but only if they receive a good offer. If he doesn’t leave this month, then ​Ramsey could leave on a free transfer at the end of the season, once his contract expires. The Welshman has been linked with clubs across Europe, including the likes of ​Real Madrid, ​Bayern Munich and Paris Saint-Germain. ​Liverpool are also reported to be interested in Ramsey, as they hope to keep him in England.

To bring Ramsey to Turin, ​Juventus would offer Khedira to Arsenal on top of the transfer fee. The German is a firm favourite of Arsenal manager Unai Emery, having been a long-term transfer target for the Spaniard.

Injury problems have limited the Khedira’s game time this season, having made nine appearances under Massimiliano Allegri. The addition of the World Cup winner to the deal could be crucial in bringing Ramsey to Serie A. Ramsey has made 24 appearances under Emery this season, though he has been limited for starts in the ​Premier League. He scored in ​Arsenal’s 4-1 win over Fulham on New Years Day, four minutes after coming off the bench.