Mauricio Pochettino’s side were hit by a stunning comeback from Wolves on Saturday as Nuno Espirito Santo’s men produced a late show from a goal down to fire the visitors to a 1-3 win at Wembley.

That defeat saw Spurs lose ground on ​Liverpool, having previously emerged as unlikely title contenders following ​Manchester City’s recent dip in form, and ​Tottenham will be keen to put their shock defeat behind them and see in the New Year with a win.

​Cardiff, meanwhile, have been in decent form of late, having earned four points from their previous two league outings, including a big win away to ​Leicester at the weekend.

Forward Kenneth Zohore is likely to be out for the next two weeks as the Cardiff attacker continues to nurse a thigh injury, though fellow striker Callum Paterson did overcome his fitness problems to return to Neil Warnock’s side as they beat Leicester at the weekend.

Only three players have scored a Premier League goal at Anfield this season:

A duo becomes a trio. pic.twitter.com/4vRS46gwJF

Defenders Jan Vertonghen and Serge Aurier are also continuing to work their way back towards fitness but will both miss out on the trip to Cardiff.

The two sides have met on 50 previous occasions, with Spurs boasting a vastly superior record against Tuesday’s opposition, having won 27 of the previous meetings. 12 of the previous clashes have ended in draws, whilst Cardiff have won the other 11 encounters.

Pochettino’s side edged a narrow 1-0 win when the two sides met in the reverse fixture this season in October, as an early Eric Dier strike earned Spurs the three points at Wembley.

The Bluebirds have not beaten the north London outfit since a 1-0 win in an FA Cup third round tie in January 1977. January 2007 was the last time Spurs failed to beat Cardiff, when they were held to a 0-0 draw in the same round of the competition.

Cardiff City have enjoyed a strong turnaround in form to close out the calendar year. Neil Warnock’s side suffered two consecutive defeats, as a 3-2 loss away to ​Watford was followed by a 1-5 hammering at home to former boss Ole Gunnar Solskjaer’s ​Manchester United.

However, the Bluebirds have shown some resilience since then, starting with a hard-fought 0-0 draw away to ​Crystal Palace, before producing a shock 0-1 win away to an in-form Leicester side to end 2018 on a high.

Tottenham, meanwhile, saw their strong run of form grind to a halt last time out, following four consecutive victories in all competitions.

A 0-2 north London derby success over Arsenal, a 2-6 thrashing of ​Everton and an emphatic 5-0 victory over ​Bournemouth were followed by a shock 1-3 defeat to ​Wolves. ​Harry Kane had fired Spurs ahead, but a late comeback saw the visitors stun Tottenham at Wembley.

Here’s a look at how both sides have fared in their previous five matches:

Cardiff have shown that they have the fighting spirit required to cause an upset and stand their ground in the Premier League but have generally not been much of a match for the higher calibre sides in the division. 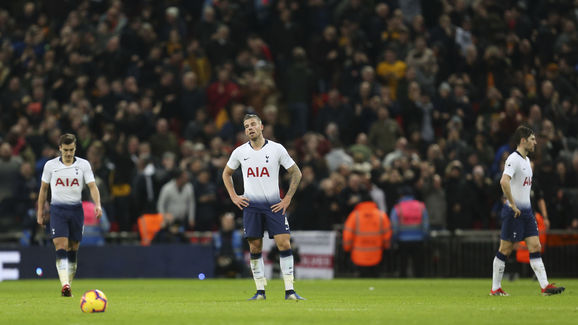 Pochettino will have his Spurs side fired up to prove that their shock defeat at home to Wolves was a mere blip as the north Londoners look to force their way into title contention. Ultimately, Tottenham should have too much quality for Cardiff to compete with.