After a frustrating first half, the Blues took the lead within five minutes of the second. After some patient, probing play, Kanté made a beeline run for the penalty area, catching the Palace defence off guard and firing a finish past 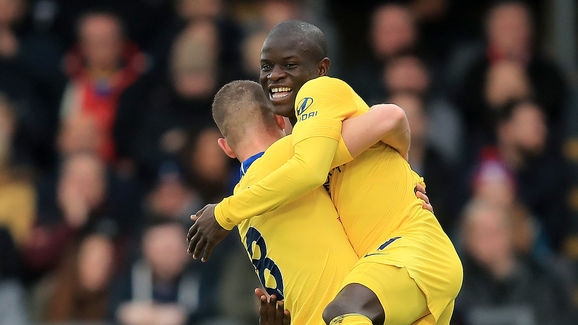 ​Palace were unable to find an equaliser, and the ​Blues cruised to a comfortable victory with a narrow scoreline that flattered the hosts.

Crystal Palace approached the game with one clear aim: Stop Chelsea scoring by any means necessary. With a defence more tightly packed than a plate of Christmas dinner leftovers, the Eagles sat deep and made the Blues work hard for any glimpse of goal in the first half. It was a highly organised defensive effort, but it all came undone just minutes into the second half. Roy Hodgson's side produced a notably lacklustre response to conceding the first goal, allowing Chelsea to continue dominating the match despite being in desperate need of finding an equaliser. With the Blues' defence far from the strongest in the competition, Palace will have surprised - and no doubt enraged - their supporters by not taking the game to their opponents. The Frenchman has a habit of turning in his finest performances when the big boys are in town, and the 28-year-old was at his best once again against the Blues. The powerful centre-back's positional play was exceptional, and he continually thwarted his opposition's intricate passing play with his bullish tackles and towering headers.

I love watching mamadou sakho in possession of the ball. He's so awkward but still manages to control it #CRYCHE

Sakho did really well this first half! Some really good stops and clearances!

Sakho has made important tackles in this game

Sakho is such an underrated passer. Many people let his technical aesthetics change their judgement of him as a passer. Not the prettiest sight but so effective at splitting lines. Would love to know his packing scores compared to other cbs. #CRYCHE

Such was Palace's lack of desire to attack in this match, Zaha might as well of been sat in the stands for the duration of the match. The Ivory Coast international was feeding off scraps from the first whistle, and was unable to cause Chelsea any problems at the back when he finally did manage to get hold of the ball.

Chelsea's dogged commitment to the 'Sarriball' style of football can be frustrating at times, but the patient style of play worked wonders again on Sunday, as the Blues passed and passed their way to another important three points. Faced with another stubborn defence, Maurizio Sarri's side diligently probed away until they got their breakthrough, before seeing out the win. While the Blues look unlikely to challenge for the title this season, their ability to grind out results against weaker teams in the competition suggests that they've got what it takes to assure qualification for next season's Champions League. You really never know what ​David Luiz is going to do at any given moment. He might hit a stunning, 50 yard pass, or suddenly pop up in the opposition penalty area as his side concedes a goal. Mercurial centre-backs aren't in high demand for obvious reasons, but when Luiz has a good day, he generally plays a blinder.

Sensible at the back, tenacious going forward and unnervingly reliable, Luiz put in a real shift to help his side earn the three points on Sunday.

Here's how his performance went down on social media

Luiz making passes that Jorginho is supposed to make lol

We don’t give David Luiz enough praise and it’s annoying. Just take a look at that assist to Kante. Madness!

The veteran striker looked a yard or so off the pace of the game for most of the match, and his sluggish play denied him two fine goals after straying offside on both occasions. The Frenchman cut a frustrated figure for much of the game, and seemed unable to keep up with the one-touch, Sarriball extravaganza his teammates were attempting to craft behind him.

Palace will look to bounce back from their defeat on Wednesday, when they travel to Wolverhampton Wanderers. ​The Premier League new boys managed to beat Spurs 3-1 at Wembley on Saturday, and the Eagles will need to be at their best to get a good result against N