Cardiff narrowly beat Leicester 1-0 at the King Power Stadium after a stunning strike from Victor Camarasa in added time stole the points for the away side.

Claude Puel's men were largely in control for the first period and were only denied through a number of superb stops from Neil Etheridge in the Cardiff goal.

During the second half, James Maddison missed a penalty for the home side and they were made to pay when Camarasa netted his third goal of the season from 25 yards. The Foxes nearly took the lead after four minutes following a defensive mix-up when an attempted back pass from Bluebirds defender Greg Cunningham completely wrong-footed Neil Etheridge in goal - luckily the ball rolled a yard wide of the post to spare his blushes.

Warnock's side came forward with more confidence when Josh Murphy called Kasper Schmeichel into action with a smart low save, before Camarasa and Murphy again tested the Danish shot-stopper.

Leicester were awarded a penalty as Maddison went down in the Bluebirds box after contact from Sean Morrison. It was the Foxes midfielder who stepped up to take it but Etheridge made a brilliant stop diving to his right - his third penalty save of the season - before Bamba somehow prevented Maddison from tapping home the rebound with a vital challenge. 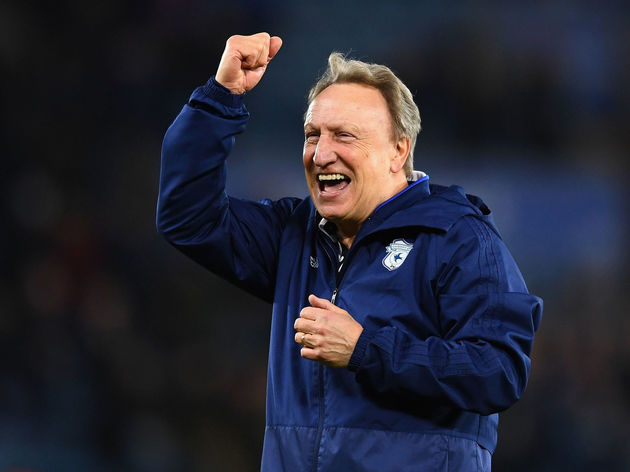 In added time both sides pushed forward and it was Camarasa who won it for Cardiff as he picked the ball up about 25 yards out before whipping a shot towards the far corner that dipped over Schmeichel flew into the back of the net - sending the travelling fans into raptures.

Check out 90min's roundup of the game below.

After consecutive shock wins over ​Chelsea and Manchester City, Leicester had managed to relieve the pressure building on manager Claude Puel, but the key issue heading into this fixture was how the Foxes would perform against a side they are expected to beat. During the first period, they certainly created the better chances but for periods were lacklustre in possession and didn't show enough intensity. It was worse from the Foxes during the second period, looking off the pace and second-best all over the pitch.

Puel's worst fears were realised in added time as his side were sunk courtesy of a wonder-strike from Camarasa which has undone some of Leicester's fantastic achievements recently.

STAR MAN - Maddison put in a brilliant display for the Foxes during the first period - he constantly looked a threat whenever he got on the ball and showed real quality and was unlucky not to score with two good efforts.

He won his side a penalty with 15 minutes to go and although he was denied after a superb-save from Etheridge, his overall performance did enough to claim star man.

Maddison is streets ahead of everyone else on this pitch

WORST PLAYER - Demarai Gray didn't have his greatest afternoon in a Leicester shirt. He attempted to take on Manga on numerous occasions but had very little joy all afternoon. Was subbed off after 78 minutes.

Without a win in three, it was interesting to see how Warnock would set his side up away from home.

It was assumed Cardiff would come to defend and nick a point, but their second half performance showed they can truly mix it in the Premier League as they were the better side and nobody can begrudge them taking three points back to Wales.

STAR MAN - Etheridge was superb in goal for Cardiff and saved his side time and time again with some outstanding stops - notably from Maddison and Vardy in the first half - then brilliantly keeping out Maddison's penalty in the second period.

Special mentions must go to Bamba and Camarasa, who were also very impressive for the away side.

Etheridge making some good saves yet again, he’s been solid since joining us #CCFC #CityAsOne #Bluebirds

WORST PLAYER - Josh Murphy had a difficult afternoon for the Bluebirds, although his effort cannot be faulted. Nothing he tried seem to pay off and he lost the ball a number of times in attacking positions, being replaced after 75 minutes on an afternoon to forget.

Josh Murphy's having a shocker today

Next up for Leicester is a trip to ​Everton on New Year's Day, whilst Cardiff are in action the same day as they host high-flying ​Tottenham.