W90
WorldNews
Lists
Next Article
Sadio Mane vs Jadon Sancho: Who is better?

​Former Liverpool left-back John Arne Riise has opened up on his confrontation with Craig Bellamy prior to Liverpool's 2-1 win over Barcelona in 2007, saying he is lucky the Welsh forward didn't end his career after attacking him with a golf club.

Bellamy and Riise would both score in the game, as the Reds came from behind to win 2-1 at the Nou Camp in the last 16 tie, but the game itself was overshadowed by reports of a training camp incident between the two players.

‘Craig Bellamy swung the golf club hard. He could have ended my career’ https://t.co/k0RYS016Ix

In an excerpt from his new book 'Being John Arne Riise: My Story' (as per an excerpt published by ​The G​uardian), the 38-year-old opened up on the bizarre incident, telling of his fear and anger towards Bellamy on the night in question.

"Pretty soon Bellamy was over by the karaoke machine with the microphone in the hand: 'Riise’s gonna sing! Riise’s gonna sing!' Furious, I went over to him: “I’m not singing. Shut the f**k up or else I’m gonna smash you!” He screamed back: 'I’m gonna f*****g kill you, you ginger c**t!”' "Bellamy shut up, and I left with Sami Hyypiä - who was just getting a little tipsy - and got a taxi back to the hotel. (Room-mate) Agger hadn’t wanted to leave yet, so I promised to leave the door unlocked. Back in the room I fell asleep almost immediately. It was no later than half twelve.

"I woke in the dark to hear someone opening the door. Obviously I thought it was Agger. I turned, but my eyes were half-asleep, and I didn’t see anything in the sudden, bright glare. But something made me realise that it wasn’t Agger. And soon I could see him - Craig Bellamy at the foot of my bed with a golf club in his hands.

"Steve Finnan, who shared a room with Bellamy, was there too, but he just stood there. Bellamy raised the club over his head and swung as hard as he could. He tried to hit my shins, which would have ended my career, but I managed to pull my leg away in time.

"I jumped out of bed, pulled off the sheet and held it between us like I was some kind of half-awake matador. Bellamy sputtered: “Nobody disrespects me like that in front of the lads!” He was completely gone. "I don’t care if I go to jail! My kids have enough money for school and everything. I don’t care. I’ll fucking do you!' He raised the club and swung again. This time he connected. Full force on my hip. I was so pumped with adrenaline that I didn’t feel the pain, but he hit me hard. It was an iron.

"The next blow smashed into my thigh. I tried to hold up the sheet, but he continued to strike. He could seriously injure me. At the same time, I knew I could take Bellamy if I needed to. I was bigger and stronger.

"Finnan stood by the door. Maybe he was there to stop Bellamy if it got too bad, but he was short and skinny. He wouldn’t have stood a chance once I made my mind up. However, I knew that if I responded to Bellamy’s attack, my career at Liverpo​ol would be over. 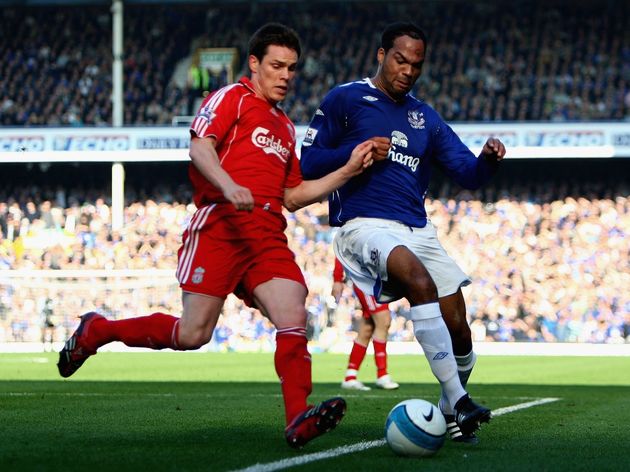 "I tried to calm him down: 'Put down the club and let’s fight with our fists. Come on! A proper fight!' He just stood and glowered at me. Then he said: 'Tomorrow at nine o’clock we’ll meet and finish this.' Then he left.

"In the morning I got up, showered and examined the injuries in the mirror. At five to nine I left the room. Agger wanted to come with me. I found Bellamy’s door and knocked. No answer. It was nine o’clock. I was ready. I knocked again, but nobody opened.

"I felt like knocking him out. I would have been justified in giving him a pounding but I had too much respect for Benítez and the team. We were about to play an important match. There was enough commotion as it was.

"Bellamy apologised but only when he was more or less forced to by the manager. He ended up with an £80,000 fine. I received no punishment, contrary to the reports of some journalists."