​Tottenham move up to second in the Premier League following an emphatic 5-0 win against Bournemouth at Wembley.

Christian Eriksen broke the deadlock in the 16th minute, as his strike from the edge of the area took a deflection off Jefferson Lerma to wrong-foot Asmir Begovic, moments after Bournemouth's David Brooks wasted a golden opportunity for the visitors with a poor finish. 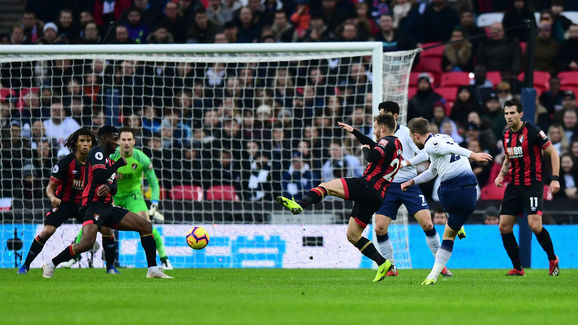 It was soon 2-0 to Spurs midway into the first-half, as Heung-min Son finished from the edge of the box following some nice work from Kyle Walker-Peters, who pounced on Charlie Daniels' poor touch in the buildup.

There was time for Spurs to net a third before the interval, as Lucas Moura's simple finish from Walker-Peters' cutback ten minutes before half-time put the hosts in a commanding position.

HALF-TIME: An excellent first half at Wembley as goals from @ChrisEriksen8, Sonny and @LucasMoura7 see us lead 3-0 at the break! #COYS pic.twitter.com/91MYAx8ZSo

Despite the positive start from the visitors in the second period, Harry Kane made it 4-0 just past the hour mark with a fine volleyed finish after Eriksen found him with a wonderful lofted pass.

There was even time for Son to double his tally for the game ten minutes later, with the forward on hand to finish following a goalmouth scramble to cap a resounding win for Mauricio Pochettino's side.

Pochettino made four changes after the Everton game, although ultimately it didn't matter for Spurs, who dominated the game once Christain Eriksen netted the games opening goal. The front four all scored which will delight the boss just as much as their eighth Premier League clean sheet, as those coming into the side continued Spurs' winning momentum, with the result against Bournemouth making it six wins from their last seven games in all competitions.

While the front four all scored against Bournemouth, full-back Kyle Walker-Peters stood out, mainly because he provided the assist for all three of Tottenham's first-half goals.

The 21-year-old was a constant threat going forward, but also had the quality to pick out the right pass at the right moment, and could be seeing a lot of football with the fixtures coming thick and fast during the festive period.

3 assists for Kyle Walker-Peters in one game. So composed on the ball whilst showing good maturity at the back.

It certainly wasn't Juan Foyth's worst game in a Tottenham shirt, although the Argentinian youngster still looked shaky at the back at times, and was fortunate to not give a penalty away at the beginning of the second-half.

Juan Foyth looks to be a bit of a liability...

Juan Foyth is: good on the ball, has nice passing range, is a strong but rash tackler. He is a defensive midfielder not a CB.

Eddie Howe will be bitterly disappointed with the result at Wembley, especially considering his side spurned two chances before Eriksen's 16th minute opener.

Ryan Fraser couldn't direct his header on target, before Brooks wasted a terrific opportunity a minute before Eriksen's strike with a poor finish. Spurs then rubbed salt into the Cherries' wounds by punishing some poor defending from the visitors, yet it could've been so different. Bournemouth's wingers were the only positives from a dire result for Eddie Howe's side, with Ryan Fraser narrowly shading Junior Stanislas as their best player, with the Scot playing in some dangerous cross that couldn't be finished.
​
​WORST PLAYER

It was a day to forget for Bournemouth's defence, with Charlie Daniels having a particularly torrid day at Wembley, with the full-back dispossessed by Walker-Peters on the edge of his own area for Spurs' second and was caught out of position in the buildup to their third.

Eddie Howe must be furious right now. Two massive chances missed, an extremely unlucky deflection in Spurs' 1st goal and an absolutely disastrous piece of play from Charlie Daniels to gift Son a goal. You won't get away with that against a team with as much quality as Tottenham.

When is Charlie Daniels just gonna give up? Horrendous mistakes week after week.

The fixtures come thick and fast during the festive period, as Spurs, who are now second in the Premier League, hope to continue their fine form when they host Wolves this weekend.

Bournemouth meanwhile, who have lost six of their last eight league games, travel to Old Trafford to face a Manchester United side who are back in form.