Atlético Madrid moved into second place in La Liga after defeating Espanyol 1-0 at the Wanda Metropolitano, in what was their final match of the calendar year.

Antoine Griezmann converted a 56th minute penalty to open the scoring for Diego Simeone's men, who held on to move level on points with league leaders Barcelona.

The hosts started on the front foot, using the pace and width of Saúl, who was playing at left-back. However, for all their early dominance, they couldn't muster any clear-cut opportunities, with Griezmann restricted to efforts at goal from tight-angles.

At the opposite end, they were fortunate not to have been caught out by their opponents, who looked a threat on the break. Jan Oblak produced goalkeeping heroics on more than one occasion after weak defending from the usually solid

10 – Atletico de Madrid faced 10 shots against Espanyol, more than in any other first half of a La Liga game at Wanda Metropolitano. Danger. pic.twitter.com/JljI1KpbhN

Atléti improved in the second period and committed men forward, which ultimately took a toll on the visitors, who conceded a penalty, which Griezmann converted to give Los Colchoneros the win.

STAR MAN - Griezmann wasn't at his best, but he performed well. He dropped deep to receive the ball and linked up well with his teammates. He was positive in possession, looking up to find his strike-partner, who unfortunately wasn't on the same wave-length. He forced López into some fine saves and made no mistake from the penalty-spot. The visitors struggled to see much of the ball initially and even when they did, possession was conceded immediately, as a result of their opponents pressing them high up the pitch.

However, they grew into the game after the first 10 minutes and enjoyed the lion's share of possession. They flurried forward with Léo

Although @RCDEspanyol has had 10 shots on target, Jan Oblak has saved all of them!

Borja Iglesias did well for the visitors, making good runs off the ball and driving forward where possible. He took players on and showed neat improvisation on a few occasions. He drew a fine save from Oblak with a terrific lobbed-effort and then was denied by the keeper when through on-goal, after beating his man. He did well against one of the best defences in Europe, but was just unable to find the net. 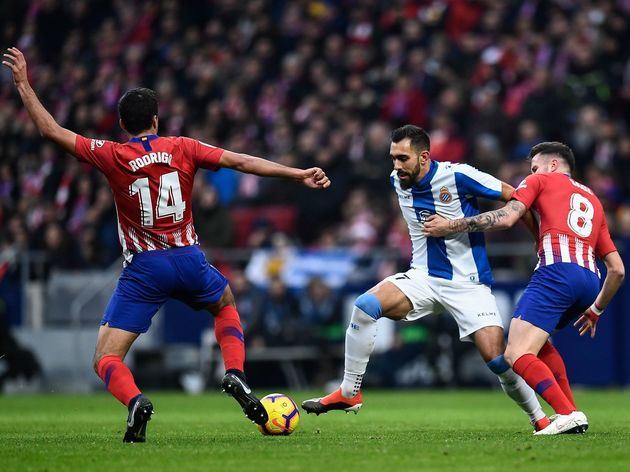 Esteban Granero's reckless challenge dampened a great overall performance from his side. He showed some nice moments in the first-half and went close with a dipping-effort, but his decision to over-commit to a challenge on Koke in the area, proved costly. He also picked up a booking, ruling him out of Espanyol's next match.

Los Rojiblancos travel to third-placed Sevilla after the Christmas period, hoping to extend their unbeaten run to 14 matches in all competitions.