​Liverpool opened up a four point lead at the top of the Premier League with a 2-0 win against Wolves on Friday night.

Despite an encouraging start from the home side, Liverpool took the lead in the 18th minute as Fabinho's cutback - following some smart play with Sadio Mane - was comprehensively finished with the outside of the foot by Mohamed Salah for the Egyptian's 11th league goal of the season.

Wolves to their credit responded well after going a goal behind, with Jonny and Matt Doherty both drawing saves from Alisson as the hosts caused the Reds a number of problems, especially through their wing-backs,

The #PL leaders are in front but the hosts have certainly had their moments#WOLLIV pic.twitter.com/gOkhW7TorW

Liverpool began the second half on the front foot following a poor opening 45 minutes, and managed to double their lead with just over 20 minutes remaining.

The ball found Salah on the edge of the area following an initial corner, with the forward producing a lovely clipped ball to find Virgil van Dijk, who finished well from five yards out to give Jurgen Klopp's side a two-goal cushion. 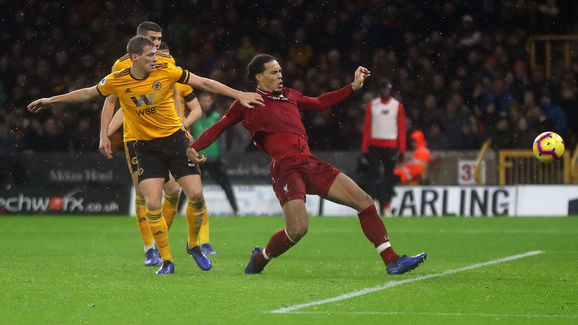 Substitute Morgan Gibbs-White spurned a great chance to gets Wolves back into the game before added time, while Georgino Wijnaldum did likewise at the other end, but it mattered little as Liverpool secured the win.

Nuno Espirito Santo's side had shown in previous games against the top six this season that they're more than capable of competing against the best in the Premier League, and the Midlands club caused the Reds a number of problems, especially in the first half. The wing-backs for Wolves were a handful for the visitors on the counter-attack against a sloppy Liverpool in the opening 45 minutes, as they cut through them on numerous occasions, although weren't able to capitalise on their good play.

There was little to excite the home fans in the second period, yet have proven to be a very dangerous Premier League side when it all clicks.

Matt Doherty was Wolves' main threat when they had their best spell in the first period, with his runs both down the right and inside giving the hosts plenty of joy, so much so that he managed to subdue the usually attack-minded Andy Robertson.

Matt Doherty one of the best players on the pitch. Surely Ireland will have to find a way to play him and Coleman in the same team  #WOLLIV

Although showing great pace in the final third, Adama Traore couldn't produce when in the position to shoot, and caused a number of attacks to break down due to being offside on too many occasions.

Adama Traore with his searing pace, taking on VVD.

Van Dijk deals with it easily, puffing away on a fine cuban cigar all the while.

Still struggling to believe that Adama Traore hasn’t won some sort of competition to be part of a Premier League squad. He is dreadful. George Weah’s cousin wasn’t this bad at Southampton.

It wasn't Liverpool's best performance of the season, although that will matter little to those who follow the Reds, as Klopp's side managed to secure top spot heading into Christmas. While the quality was lacking from them during large spells of the game, with slack passes from Fabinho and Naby Keita at either ends of the first half almost gifting Wolves chances, they had the quality to take their chances when it mattered through their best two players in Salah and Van Dijk.

The last four teams that have led the Premier League at Christmas have gone on to win the title, with performances such as this certainly helping their cause.

While Salah grabbed a goal and assist, Virgil van Dijk was immense for the visitors, capping a fine display with his first Premier League goal for the Reds.

The Dutchman was calm and assured as always at the back, reading the danger well and very rarely gave the ball away when in possession, in what was another fine performance from the centre-back.

It doesn't get said enough how jaw-droppingly good Liverpool's recruitment has been. Salah, Ox, Robbo, van Dijk, Alisson, Shaqiri, Fabinho and Keita are the last eight big signings. Not one flop. All either massive, massive successes or on the path to becoming so.

Seriously though. Van Dijk is most likely the best in the world. Not a knee jerk reaction to a quality game tonight and a goal. More so that he's been consistently brilliant since his arrival. Man mountain. Love the bones of the lad.

​WORST PLAYER
​
It wasn't quite Naby Keita's night at Molineux, with the former RB Leipzig midfielder failing to impact the game from a wide left position.

His passing range was off for the vast majority of his 58 minutes on the field, with a poor pass in giving Doherty a chance late into the firsthalf, before the Guinean international was forced off due to injury.

The Naby Keïta on the left experiment needs to come to an end.

Our forward play on the break has again been poor. Poor pass selection. And AGAIN Keita is doing nothing to impact the game. Where are the runs with the ball? The winning the ball back? Creativity? Not seeing all the fuss about him tbh. Far to inconsistent

Both sides return to action on Boxing Day as the fixtures come thick and fast during the festive period, as Wolves travel to London to face Fulham.