Football fans in the Premier and EFL are set to travel a combined 31,244 miles to and from away games over the Christmas period, from Boxing Day to 3rd January. Incredibly, that is the equivalent distance of three return flights from London to Sydney on the other side of the world.

Some fans will have it easier than others in their three festive games, with 46 of the 92 clubs playing at home twice and the other 92 on the road twice. 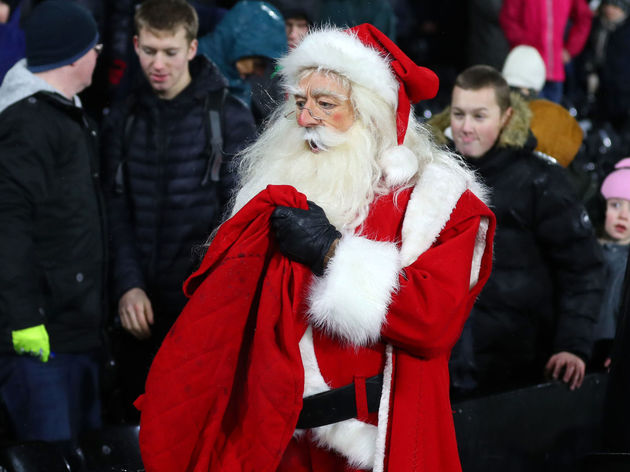 Research carried out by Virgin Media and the Football Supporters' Federation (FSF) has revealed that where teams are travelling twice, away fans will pay an average of £117.77 on match tickets, travel, food and drink to follow their team this Christmas.

Specifically in the Premier League that average cost per fan is £122.

Newcastle fans have it by far the worst of any fans in the country, with the average cost expected to hit £282.30. The already isolated Magpies only have one game at home and are playing Liverpool and Watford away on Boxing Day and 29th December respectively.

Even with the £30 cap for away tickets in the Premier League, travelling costs have pushed up what loyal Geordies will have to spend on the total 880 mile journey. Doncaster, Charlton, Manchester City and Plymouth fans are all also set for an average cost of at least £200. Yet in stark contrast, Fulham fans have it easy this Christmas. The Cottagers are at home twice, while their away trip requires just a 20-mile round trip across London to face Arsenal.

Newcastle supporters are the only set of fans in the country that will have to travel in excess of 800 miles in total over two away games, but the longest single journey will be made by Grimsby fans when they travel 606 miles there and back to face Exeter in League Two on 29th December.

While Fulham fans will travel the least distance, it is Crewe fans who will incur the lowest cost of following a club on the road this Christmas. With two festive games at home, their trip to Bury on New Year's Day is expected to cost an average of just £43.05 per fan all in.

Southampton fans will have to make a trip into London for their club's game with Chelsea on 2nd January. It will cost an average of £71.37, but Saints supporters will have at least saved on the ticket price thanks to sponsors Virgin Media, who are subsidising the price of the ticket so that each supporter will pay just £20 to get in, a full £10 below the usual Premier League cap.

The most expensive away ticket this Christmas is the £39 Blackburn fans are paying at Championship leaders Leeds. The cheapest is the £17 Crawley are charging Colchester fans in League Two.

Football stadium postcodes were used as a proxy for point-to-point travel estimates. Driving distance and journey time were measured in miles, based on the shortest driving travel time from stadium to stadium using Google Maps.