​Milan travel to face Serie A strugglers Bologna on Tuesday evening as the Rossoneri look to close the gap on bitter rivals Inter who currently reside six points above Gattuso's side in third place.

Moreover, the visitors will be desperate to bounce back from their crushing midweek elimination from the Europa League following defeat at the hands of Olympiacos.

This game will have particular Check out 90min's preview of Tuesday's tie below.

​Milan remain without long term absentees Giacomo Bonaventura and Mateo Musacchio who are not expected to return to first team action until next year.

Due to the importance of their final Europa League group game, Gattuso didn't have the luxury of resting his first team players on Thursday, giving them little time to recover for Tuesday's league tie. Bologna have been blessed with a fully fit squad which will likely be tested to its limit against the Italian giants on Tuesday night.

These two sides last faced each other near the end of last season when the Rossoneri came out 2-1 winners against the Serie A minnows. In recent times, Bologna have typically struggled against Milan having won just one game against them in 17 attempts. Milan have failed to score against Saturday's opponents just three times in their 21 meetings and will be desperate to notch again this time round following a recent run of poor form.

Milan have been struggling in the Italian top flight of late, having won just once in their last four league outings. Their misery was compounded further on Thursday night as they were dumped out of the Europa League by an impressive Olympiacos side.

Gattuso will be relying on his attacking talents of Gonzalo Higuain and Suso who have registered 22 goals and assists between them this term. Having not won a league game in their last eight attempts, Bologna currently find themselves 18th in Serie A with just two wins to their name this term.

Here's how each team performed in their last five fixtures:

With the two sides currently sitting 14 places apart in Serie A, this should be a one sided affair. Even though Milan have been struggling of late, Tuesday's tie is the perfect opportunity to bounce back from Thursday's disappointment and get their season back on track. 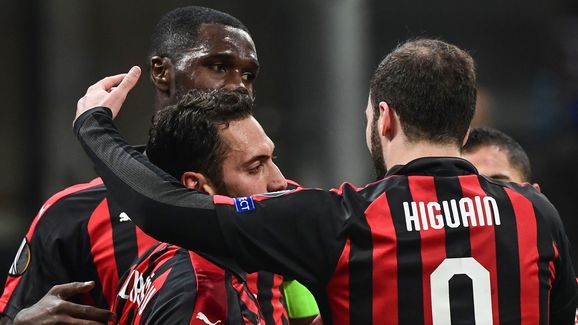