​Kevin de Bruyne says that Liverpool will push Manchester City close until the end of the season in the race for the Premier League title, but has insisted he is only focused on his own team.

Liverpool went top of the Premier League after City's defeat to Chelsea last weekend and retained first place with a 3-1 win over Manchester United on Sunday.

The Reds are the only unbeaten team in the top seven tiers of English football, and ​De Bruyne admitted that he sees no reason why their excellent form can't continue for the rest of the campaign.

"I don't know why they can't sustain it - I think they'll go on to the end. I'm not too worried about them - they'll do what they do and we'll have to try to win our games and go forward. They'll try to keep pace with us and vice versa." pic.twitter.com/hcBewcOKsM

"I don't know why they can't sustain it - I think they will go on to the end," he said, quoted by the ​Daily Mail.

"I'm not too worried about them [because] they will do what they do and we'll have to try to win our games and go forward. They'll try to keep pace with us and vice versa. But it's still early. There's no pressure. We need to do what we do."

​Liverpool and ​City have already met once this season, sharing a goalless draw at Anfield. They meet again on 3 January 2019 at the Etihad Stadium, but De Bruyne insisted that that one week will not be decisive in the title race.

"You know how it goes. You can have a week where you lose three games and everyone speaks differently," said the Belgian. "There is still so long to go. The amount of games can trip you up, injuries can trip you up." 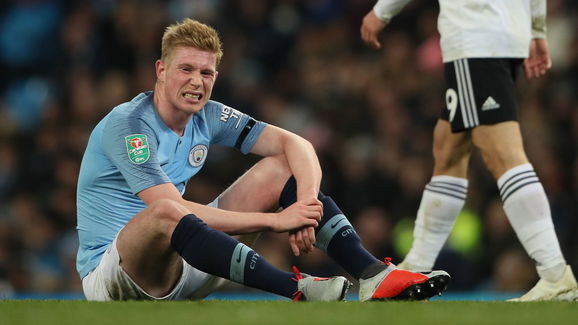 De Bruyne knows all about injuries. He is yet to start a league game this season after a series of setbacks, although he did come off the bench against Everton on Saturday.