Leicester had a goal ruled out on 27 minutes, Jamie Vardy deemed to have fouled goalkeeper Vincente Guaita when robbing him of the ball and slotting home.

The game finally burst into life six minutes before half-time, as Luka Milivojevic's long shot found the top corner fantastically. The Serbian scored in fantastic fashion to give Crystal Palace the lead.

Crystal Palace had numerous chances to double their lead in the second half, while the visitors were unlucky not to equalise as the Eagles held on for their second successive home win. It was interesting to see how ​Crystal Palace would fare without star man ​Wilfried Zaha, and his absence was evident in the first half. They were mediocre until Milivojevic's fine finish, and didn't seem to have the cutting edge in the final third.

Nevertheless it was their Serbian captain who came up with the goal, a crucial one for Roy Hodgson's side as they earned a valuable three points in a dogged display at Selhurst Park.

STAR MAN - Captain Luka Milivojevic led by example once again, as his fourth goal of the season secured a vital three points for Crystal Palace. He worked tirelessly in midfield for the Eagles, and was apart of every move in a big win at Selhurst Park. 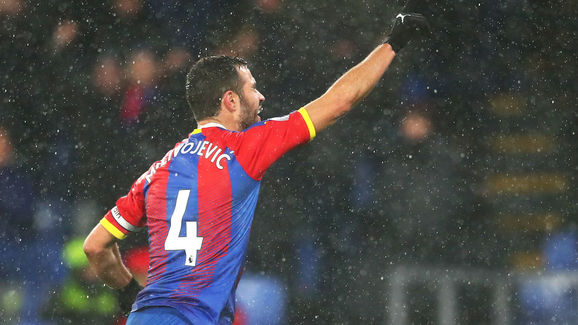 Milivojevic has been the key man in Roy Hodgson's side all season, playing every minute of the Eagles' Premier League season. He continues to be the consistent force behind the side, as he produced another outstanding performance on Saturday.

WORST PLAYER - Although Palace got the win, striker Jordan Ayew was very underwhelming. The on loan Ghanaian was caught offside twice in the first half, and did little to help his team on Saturday in a poor performance.

It is a big concern for Roy Hodgson that his strikers are not providing goals, with all four in his squad having amassed a single goal this season. If they want to secure their Premier League safety, Hodgson must aim to sign a prolific striker in the January transfer window. ​Leicester City were unlucky at Selhurst Park, but didn't seem up to scratch. Their first half was filled with errors and poor passes, and although they improved in the second half it was a frustrating game for the Foxes who just couldn't find a way through.

They were unfortunate on several occasions, with a disallowed goal and the woodwork denying them an equaliser. Leicester now have just one win in six league games, and with a tough run of fixtures coming up they need to regain form very soon. STAR MAN - Although he didn't get on the scoresheet, ​Jamie Vardy still played very well for Leicester. He created numerous chances and was positive going forward, yet was out of luck as he searched for his sixth goal of the season.

The Leicester striker was so close yet so far when searching for a goal, but he stood out for the Foxes in a disappointing defeat.

WORST PLAYER - Demarai Gray was very quiet on the wing, and produced few chances for Leicester. He was unlucky at times, but overall it was a game to forget for the young winger as the Foxes were beaten once again. Leicester City now prepare for a huge pair of fixtures, first travelling to ​Chelsea on 22 December. They are then back at King Power Stadium, as they welcome Manchester City on Boxing Day.