Manchester City rounded off their Champions League group stage campaign with a 2-1 victory over Hoffenheim on Wednesday evening.

The win means that City comfortably topped Group F, whilst Hoffenheim finished at the bottom of the pile. City began the game rather inauspiciously and they found themselves behind after just 15 minutes. Aymeric Laporte was penalised for a clumsy challenge in the box and Andrej Kramaric stepped up to convert the resulting penalty with consummate ease.

Pep Guardiola's side responded well to conceding and they were able to find themselves an equaliser right on the brink of half time. Leroy Sane struck a wonderful free-kick into the top corner from around 30 yards out, leaving Oliver Baumann in the Hoffenheim goal with absolutely no chance. 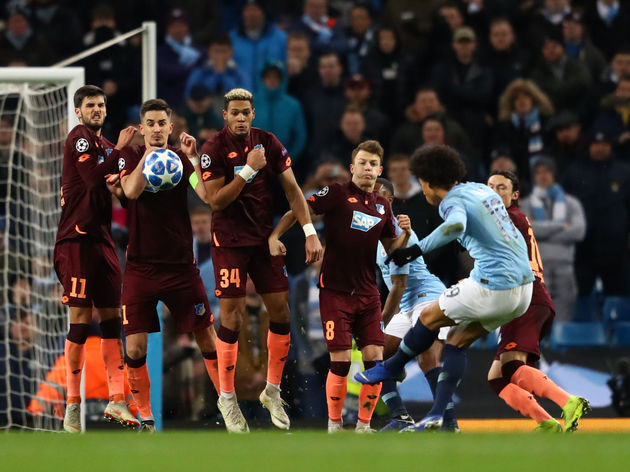 That goal gave City the confidence to continue pushing on in the second half and, after wasting a handful of opportunities in front of goal, they managed to take the lead on the hour mark. Sane was on target again, this time finishing from close range after being slipped through on goal by ​Raheem Sterling.

City continued to mount pressure on Hoffenheim for the rest of the game, but they were unable to extend their lead any further.

Here's a breakdown of the evening's events below.

Whilst ​Manchester City had already secured their spot in the round of 16, it was still important for them to respond in the right manner after their surprise defeat against Chelsea at the weekend. They didn't have it all their own way on the night but, in the second half in particular, they were able to exhibit the sort of fluid attacking football their supporters have grown accustomed to over the past few seasons under Guardiola.

The scoreline doesn't really reflect how dominant they were and the only real criticism that could be directed towards the Citizens is that they were too wasteful in front of goal. When you consider the sheer amount of chances they fashioned themselves, they should have come away with at least five or six goals.

There were plenty of decent performances on show from a City perspective, but Sane stood above the rest after netting an impressive brace.

The German ran the show all evening with his incisive runs and tricky footwork causing the Hoffenheim defence all sorts of problems. He looks to have firmly returned to his best form after struggling somewhat during the opening stages of the season and that is thanks in part to Guardiola's clever man management of the young German.

His free-kick also deserves a special mention as it was one of the best you are likely to see all season.

That Sane free kick though 🔥🔥

Sané's strike was his first goal in 913 minutes of Champions League football since netting against Monaco in March 2017.

Not a bad way to end the drought. ⚽️

Can we all agree now that Leroy Sane’s 1st goal tonight was the best of the CL so far? Thanks

Zinchenko has found it very difficult to earn himself regular minutes for City over the past two seasons, so he has to make the most of every opportunity he gets.

Unfortunately for the Ukrainian, he looked completely out of sorts. His passing was often very sloppy and he failed to project any sort of confidence when he had the ball at his feet in the final third.

Manchester City will be looking to get back to winning ways in the Premier League when they host Everton on Saturday afternoon.