As is often the case with managers joining new clubs in divisions they've previously managed, Ranieri has been linked with a host of his former players since taking the reins in November.

He took over from Slavisa Jokanovic, with the Cottagers rooted to the foot of the Premier League, and it seems the Italian is eager to exceed expectations at Craven Cottage with players who achieved similar miracles for him in the 2015/16 season. However, while Ranieri is eager to avoid relegation this term, his ex-Leicester players performed the opposite feat by historically winning the title at 5000-1 odds three years ago.

​TEAMtalk are reporting that Simpson and Okazaki figure highly on Ranieri's wishlist, and with good reason. Simpson was the Tinkerman's first choice right-back throughout their unforgettable season and would offer experience in an embarrassingly leaky ​Fulham defense, which has shipped 40 goals in just 16 matches.

At the other end of the pitch, Okazaki played 36 games during the 2015/16 campaign, scoring five goals, and could provide the intensity, commitment and link-up play to support ​Aleksandar Mitrovic. 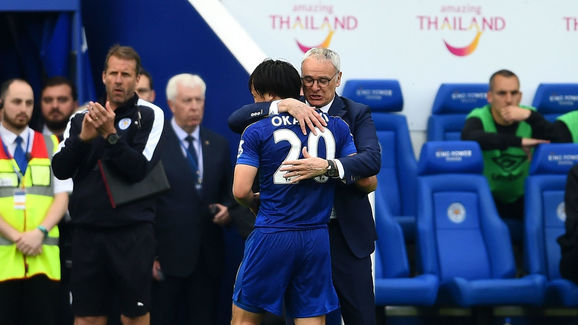 With neither player featuring heavily under Claude Puel at ​Leicester, Ranieri believes both could be made available for transfer in the coming window and provide the spark his side need to climb up the ​Premier League table.

In their most recent outing they were ​hammered by ​Manchester United and will need a positive result against ​Crystal Palace on Saturday if they are to convince any players to join their cause.