​The stipulations were simple - match Inter's result and Spurs will go through.

Ousmane Dembele tore up the Tottenham script in the seventh minute, however,

Imagine Mauricio Pochettino's relief, then, to hear shortly after of the news of a PSV goal at the San Siro. Back on track - half way there.

This turned out to be the story of much of the second half, with Cillissen making a string of world-class saves to keep Pochettino's men at arms length. That is, until, the 85th minute when Lucas Moura converted a low Harry Kane cross. A crucial goal following news of an Inter equaliser.
​
On the final whistle, the ​Tottenham staff and players alike turned to their noisy travelling contingent of supporters whose celebrations told them all they need to know. Spurs go marching on. ​Barcelona's second-string team were overrun in possession for much of the game and created very few chances after the opening goal. For much of the second half, they relied on the talents of their back up goalkeeper who certainly put it a performance first choice stopper ter Stegen would have been proud of.

As the Spanish media reported, this game was more about retaining their honour than anything else, with the home side going into it having already wrapped up the group. It became obvious that this was the case, as they sat back and soaked up waves of Tottenham pressure. Lionel Messi came on late but had little impact and their best chances fell to Philippe Coutinho who struck the same post twice.

In Lionel Messi's absence, Dembele was the player, especially in the first half, who posed the Spurs back line the most problems. He created his own goal by winning possession off of Kyle Walker-Peters and then went on to take his opportunity with the aplomb one may expect to see from his Argentinian team mate. The second-string centre back was overrun by Tottenham's attacking threats and gifted Spurs several chances to edge in front of the Catalan giants. The 23-year-old will not feature much in the first team this term, but has done himself no favours after tonight's poor performance.

Despite getting through by the skin of their teeth, Tottenham got the job done when it looked as though it might not be their night. The Spurs narrative on nights like this is they will crumble and 'do a Spurs', but tonight was different. Yes, they were boosted by events in Milan, but wouldn't have gone through without finding the net at Camp Nou, which is no mean feat, even against a heavily rotated Barca side. 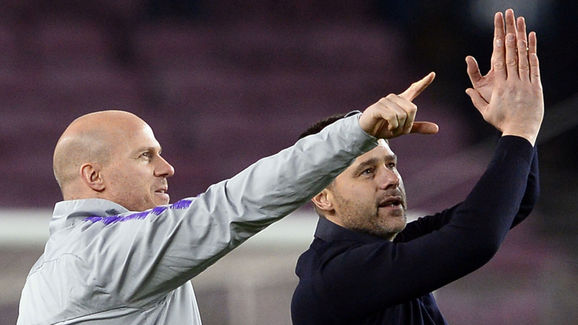 Tottenham's full-back was immense tonight and proved his worth on one of the grandest stages of them all. His tough tackling and attacking ventures gave Tottenham something different down the left flank and his desire to secure the result was contagious throughout the Spurs team. The left-back did spurn a late opportunity, though it turned out to be academic in the end.

Spurs' other full-back had a Champions League debut from hell. After giving the ball away to Dembele, Walker-Peters failed to recover in time to stop the Frenchman taking it all the way and from that point onwards the 21-year-old never looked comfortable.

After picking up a booking in the first half to boot, Walker-Peters was spared of his Camp Nou nightmare in the 61st minute when he was replaced by Erik Lamela. Both sides will be going into the hat in the last 16 as they look to continue their impressive Champions League campaigns.

For Tottenham, they will be playing post-Christmas European football for the second time in consecutive years, but will be looking to go a step better this time round after being dumped out in the round of 16 last year.

Barça meanwhile will look to bring back their heavy hitters when the Champions League resumes in the new year, as Ernesto Valverde's side seek European domination once more.