Newcastle fans have torn into winger Kenedy following his lack of effort in what turned out to be the winning goal in the Magpies' loss to Wolves on Monday night.

​After playing the last half an hour with ten men, Newcastle entered stoppage time holding what may have been a vital point at home to Wolves in their bid to avoid slipping to the relegation places. 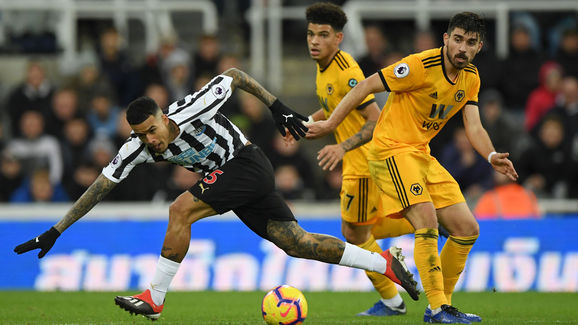 However, just prior to entering added time, Magpies boss Rafael Benitez decided to make a switch, bringing on Chelsea loanee Kenedy to replace Christian Atsu - seemingly with the intent to provide extra defensive cover in a bid to keep the scoreline at 1-1.

However, as ​Wolves broke forward, their right-back Matt Doherty - who had been playing all 90 minutes - ran straight past Kenedy with the Brazilian seemingly having a care in the world as he jogged back towards his own goal. Doherty went on to score, winning the game for Wolves with just minutes left, but it was Kenedy's lack of effort that angered ​Newcastle fans on Twitter.

Kenedy on the pitch for 7 minutes and could simply not be arsed to track Doherty back for that goal. Disgraceful son #NUFC

Surely this is Rafa's own doing though?

Put Kenedy on with minutes to go, wastes possession, Perez gets possession, too lightweight AGAIN, we concede late on.

Love Rafa but his subs & the times he chooses them are fucking weird.#NUFC

Kenedy the freshest man on the field and he left his man free at the back post for the winner. Inexcusable. #NUFC

The game was full of controversy, as Mike Dean sent off DeAndre Yedlin before failing to spot a clear penalty and potential red card at the other end of the pitch when Ayoze Perez was elbowed in the face. Even so, the Magpies were in with a shout of earning a draw before Wolves' winner, and Kenedy will need to earn back the Toon Army's trust next weekend when Newcastle face Huddersfield.