In the much anticipated meeting between these two Argentinian rivals some 6,000 miles from home, the finely poised final was clinched by River Plate after a nervy extra time in Madrid.

In an eventful first half which saw both teams nervous in attack and boisterous in defence, it was Boca Juniors who struck first through River's eventual equaliser came through Lucas Pratto who had finally been given a clear sight of the target following a quiet night for the striker. River had been persistently threatening the Boca defence and the former Boca player fired home to an exposed net with 68 minutes on the clock.

But the game needed extra time for a winner and it was well worth the wait. Boca had gone down to 10 men following

River Plate were arguably wrongly not awarded a penalty with just over half an hour remaining in Madrid with Boca still hanging on to a 1-0 lead. After a looping ball was sent into the box, River striker

It seems a cop out to give 'star man' to a goal scorer, but River Plate played collectively well as a team and a single outstanding player was difficult to single out. Striker Pratto had to be patient and wait until 20 minutes remained until he could finally get a shot on target, and he cooly buried it past Andrada in the Boca goal.

River had dominated much of the play throughout the fiery encounter, probing the Boca defence but continuously failed to capitalise on some exhilarating build-up play.

It was a fairly uninspiring game for 36-year-old Leonardo Ponzio who was substituted with just over half an hour remaining.

The Argentinian's main contribution to the game was picking up a yellow card as he failed to really make an impact in the frantic game of football. 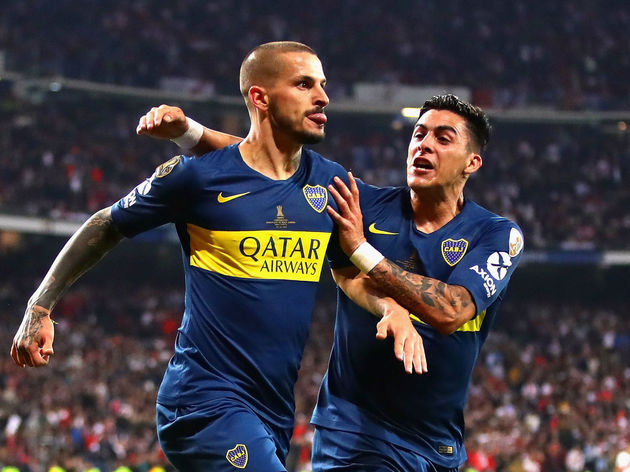 The striker ran between two River defenders after a sublime through-ball by Nandez, to meet Franco Armani one-on-one, but cooly slotted past the helpless goalkeeper to score his fifth goal of the competition and send Boca fans into ruptures at the Esteban Andrada in the Boca goal almost cost his team a penalty if it wasn't for his slight play acting in the collision with River striker Pratto. The goalkeeper came nowhere near to touching the ball as he took out the River striker but decided to stay down clutching his face - forcing the referee to award the free kick in his favour.