​Manchester City star Raheem Sterling has claimed that certain areas of the press have double standards when it comes to reporting the lifestyles of footballers of different races, following allegations of racial abuse from a Chelsea fan.

Video footage went viral on social media on Saturday evening, in which a Chelsea fan appeared to shout an abhorrent racial slur at the England international during City's 2-0 defeat at Stamford Bridge. The incident is currently being investigated by both Chelsea and the Metropolitan Police. 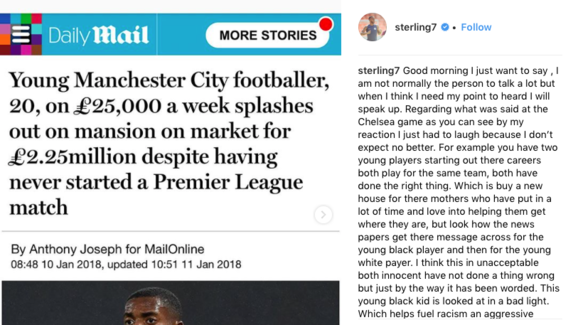 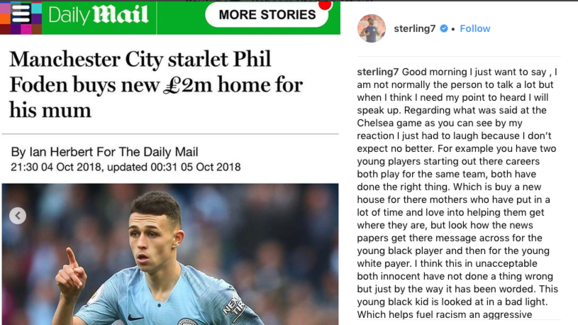 "Regarding what was said at the ​Chelsea game, as you can see by my reaction I just had to laugh because I don't expect no better. For example, you have two young players starting out their careers both playing for the same team. Both have done the right thing, which is buy a new house for their mothers who have put in a lot of time and love into helping them get where they are. "But look how the newspapers get their message across for the young black player and then for the young white player (Sterling gave the example of two Daily Mail stories on respectively). I think this is unacceptable, both innocent and have not done a thing wrong but just by the way it has been worded.

"This young black kid is looked at in a bad light, which helps fuel racism and aggressive behaviour. So for all the newspapers that don't understand why people are racist in this day and age, all I have to say is have a second thought about fair publicity and give all players an equal chance."

Meanwhile, ​Man City boss Pep Guardiola claimed he was impressed with his side's performance against Chelsea, despite losing the match. The ​Citizens dominated much of the game, and were unlucky not to score in the first half, but goals from N'Golo Kante and David Luiz either side of the break condemned City to their first Premier League loss of the season.