It was a tense start to the game with both teams enjoying their fair share of possession, however it was the visitors who got the breakthrough in spectacular fashion. Lionel Messi stood over a free kick around 30 yards away from the goal, and in typical Messi fashion curled the ball over the wall and right into the top corner, giving us another magical moment from the Argentine. 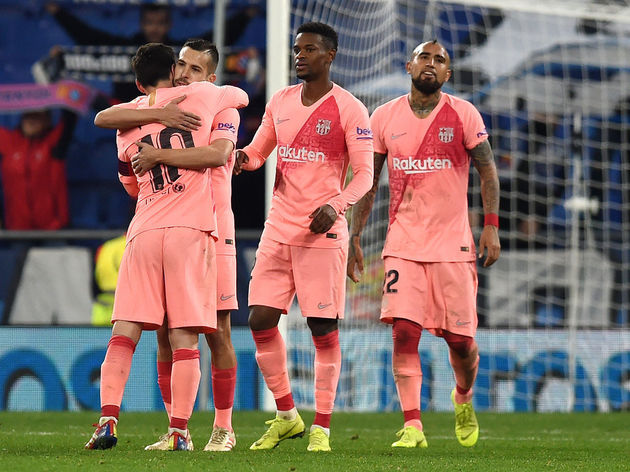 The goal seemed to settle a few ​Barcelona nerves, and they soon doubled their lead. A dazzling run from ​Messi looked to have been halted by the Espanyol defence, however he then showed great vision to pick out ​Ousmane Dembele who curled a wonderful effort past Diego Lopez into his top corner once again.

The visitors went close once again soon after with both ​Luis Suarez and Messi hitting the post in quick succession, but they weren't to be denied a third goal before half time.

Suarez was played through by Dembele and did well to shrug off a defender, and with hardly an angle to work with somehow managed to steer the ball through the keepers legs and into the back of the net. If anyone thought Messi's first half free kick was a fluke, then he certainly proved the doubters wrong with yet another spectacular free kick from a similar distance in the second half. It was the same result, with the ball flying past Lopez into the top corner to make it 4-0 to the visitors.

Oscar Duarte thought he'd grabbed a consolation goal for the home side, however the goal was reviewed and eventually brought back for offside - much to the displeasure of the home fans left in the stadium. The game finished 4-0 on what was a night to remember for Barcelona, here's a breakdown of the evening's events:

On paper this could've been a very tough night for Barcelona, going up against an Espanyol side who had made a great start to their ​La Liga campaign. There was even more pressure put on the Catalan giants given the fact that due to other results prior to the game, as both Atletico Madrid and Sevilla had gone level on points with Ernesto Valverde's men ahead of the game. However, Barcelona certainly took care of business on the night. They've been prone to leaving matters late so far this season relying on late goals to earn points, however tonight they got their business done early with three magnificent first half goals. They looked in control at all times and never looked like letting the hosts back into the game.

They've extended their lead at the top of La Liga to three points and we were treated to a special performance from one of the hottest sides in European football at this present moment.

STAR MAN - There will be any surprise as to whom was the best player on the night. Messi ran the show from start to finish and showed exactly why he is one of the, if not the best player in the world at the moment.

Messi is the best to ever do this football thing mehn

He scored two spectacular free kicks and a dazzling run in the first half helped set up another for Barcelona, proving to be unstoppable on the night. The Espanyol defence had no answer to the Argentine, who certainly put on yet another masterclass in what was an emphatic win with a performance which will certainly spark the Ballon d'Or debate once again.

WORST PLAYER - It's not often when a defender keeps a clean sheet but ends up being one of the worst performers on the night, however in fairness to Clement Lenglet he didn't have much to do throughout the game. He did what he had to do and stopped Espanyol from scoring, however the Barca defence was never really threatened. On a night where Valverde's attackers stole the show with some spectacular performances, Lenglet was always going to be overshadowed and he certainly won't be frustrated by having nothing to do at the back.

The win means that Barcelona have opened a three-point cushion at the top of La Liga ahead of Atletico Madrid and Sevilla, and having already secured their qualification into the knockout stages of the Champions League, their clash with Tottenham on Tuesday night will be a mere formality before they travel to face Levante in La Liga on Sunday night. As for Espanyol, they've now lost their last four La Liga games, and will be desperate to end their torrid run when they host Real Betis on Sunday afternoon.