Unai Emery was happy with his Arsenal side after the Gunners earned a 'tough' 1-0 win over Huddersfield Town on Saturday afternoon.

The Gunners secured the victory in the 83rd minute, when Lucas Torreira found space in the six-yard box to execute a fantastic overhead kick. The win sees Arsenal move up to fourth in the Premier League, level on points with London rivals Chelsea. Speaking to Sky Sports, Emery said: “It was a tough match for us. I wanted to play with more rhythm in the match but they were moving with a slow rhythm and with all the passion we needed to play this [type of] match and at the end of it, we are happy with this victory.”

​Huddersfield were very stubborn throughout the 90 minutes, holding off Arsenal right until the end.

The win for ​Arsenal sees them extended their unbeaten run to 21 games in all competitions. They haven’t lost since August, when they succumbed to back to back defeats at the start of Emery’s tenure to ​Manchester City and ​Chelsea respectively.

It's @LTorreira34's world and we're all just living in it 🌍 pic.twitter.com/LTv1dKBvrY

Arsenal returned to winning ways following a midweek draw against ​​Manchester United on Wednesday. Emery added: “It's been a very big week for us and we wanted to win today for our supporters.

“We wanted to play better with a different rhythm in the match but we couldn't do that because there were a lot of stoppages in the 90 minutes.”

Arsenal are back in action midweek, when they play two games in three days. They start by hosting Azerbaijani side Qarabag in the Europa League on Thursday, before travelling to ​Southampton in the ​Premier League on Sunday. 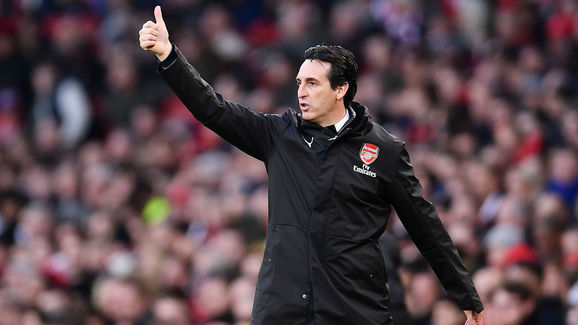 Speaking about the upcoming fixtures, Emery said: “We are going to rest for two days after this week and then we are going to prepare.

“First for the match in the Europa League on Thursday and then the match in Southampton with the players we have. Next Sunday we are going to find the best first XI.”