Chelsea produced one of the shocks of the season as they rode a first half Manchester City storm to snatch a stunning 2-0 victory over the champions at Stamford Bridge on Saturday.

Chelsea took the lead against the run of play in the first half, having been far inferior to the visitors in terms of possession and chances, as N'Golo Kante fired home emphatically into the roof of the net from an Eden Hazard cut back on the stroke of half time.

The Blues continued strongly in the second half with the momentum from their late first half strike putting the wind in their sails, and ​City rarely threatened the hosts after the interval.

​Chelsea capitalised on the shift in momentum in the second half. David Luiz planted a looping header into the corner of the net from a Hazard corner, sealing a famous win for the Blues, as Pep Guardiola's side lost their unbeaten start to the Premier League season.

Chelsea's strong start to the season and bright transition into life under Maurizio Sarri was largely characterised by their ability to control play through the middle of the park.

With Jorginho as the technician and Kante as the destroyer, the Blues seemed to have found the perfect balance which enabled them to dominate proceedings in any given match. However, teams have begun to find ways to exploit Chelsea's lack of a plan B in recent weeks.

N'Golo Kanté has now scored more Premier League goals this season (2) than he ever has in a single league campaign in England.

Chelsea began to unearth a new approach to finding a way around the opposition's pressing on Saturday. With City's forward pressing leaving spaces in behind their defence, Sarri's side deployed a simple tactic of long balls over the top to negate the loss of space in the middle of the park.

The results were positive, as such tactics instigated Chelsea's first half opener before making the Blues far more dangerous in similar style in the second half. The likes of David Luiz and Jorginho are primed for unleashing such direct, floated passes into the path of the Eden Hazard and co. up front, who in turn thrive on receiving the ball and using pace to run at the opposition.

6 - Eden Hazard's assist for N'Golo Kante's goal was just one of six passes that Chelsea completed in the final third of the pitch versus Manchester City in the opening 45 minutes of this match (Man City completed 53). Snatched. pic.twitter.com/ofH9akNgx8

STAR MAN - Chelsea may have lacked their usual control and quality in the middle of the park, but Kante ensured that they did not lose their intensity against the champions. City pressed with authority, but the Frenchman played on with his usual dogged tenacity to ensure that Chelsea were not to be bullied without reply. Kante's well timed run and emphatic finish to give his side the lead emphasised the thrust and graft that the diminutive midfielder gives Sarri's side.

Eden Hazard has created more chances (42) than any other player in the Premier League this season.

With teams such as City realising that pressing Chelsea in the middle limits their authority in matches in recent weeks, Kovacic's skills have become less relevant in the Blues' adaptation to the intense demands. The World Cup finalist had little impact on Saturday.

Guardiola sprung a tactical surprise ahead of the heavyweight clash by opting to start Raheem Sterling as City's central striker, with Gabriel Jesus left on the bench and Sergio Aguero absent. The result was a high tempo and energetic press from City's front line which refused to rest. 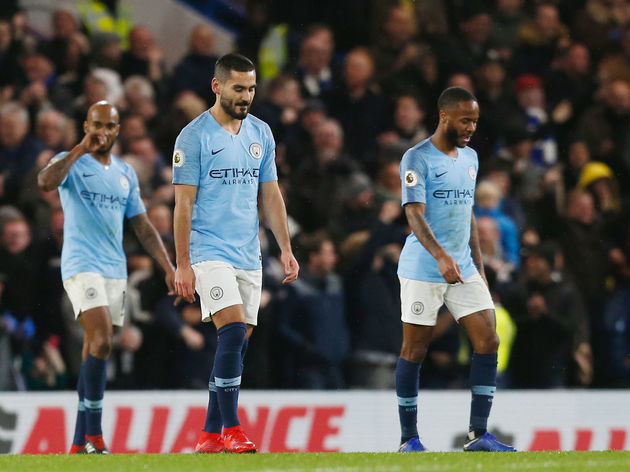 Consequently, Chelsea were squeezed every time they looked to play in the from that start, pressed into conceding possession many times when they were on the ball, as City matched graft and application with their technical excellence in the first half.

However, City's lack of end product in the absence of Sergio Aguero meant that Guardiola's side were unable to capitalise, allowing the game to slip into Chelsea's hands.

STAR MAN - Though there was often a lack of end product from City's attack, Raheem Sterling showed he was more than willing to adjust his game to meet Guardiola's demands as City's central striker on Saturday. The England forward worked tirelessly to press Chelsea's defence and epitomised his side's high intensity approach to the game. WORST PLAYER - So often City's mastermind and a player for the big occasion, David Silva struggled to find his way in the game at Stamford Bridge, unable to have his usual degree of influence on the match. After slipping into the periphery of proceedings in the second half, Silva was substituted with a hamstring injury just after the hour mark.

Chelsea's busy schedule continues with a trip to Hungary to face MOL Vidi FC in their final match of the Europa League group stage on Thursday. With five wins from five so far in the group stage, Sarri's side are already confirmed as winners of Group L and will progress to the knockout stages of the competition.

The Blues' push for a place in the top four continues next Sunday with a trip to the south coast to face Brighton in the Premier League. 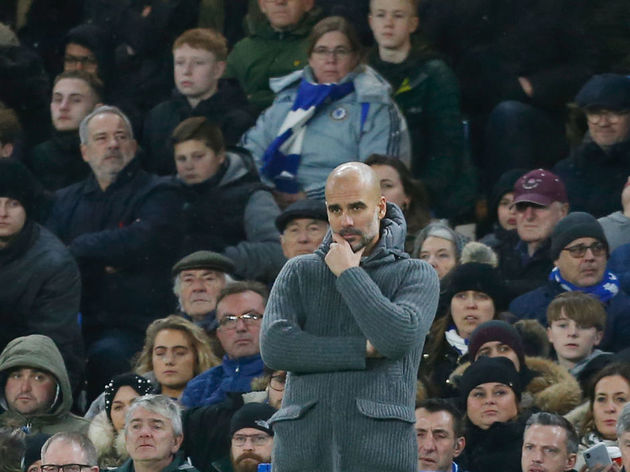 City, meanwhile, close out the Champions League group stage with a home clash against Bundesliga side Hoffenheim on Wednesday. Guardiola's side have virtually guaranteed themselves as winners of Group F, though a win in midweek will seal their authority in the group.

Another testing clash lies ahead of City next weekend, as the champions host an Everton side who are much improved under Marco Silva this term. Next Saturday's match will be another strong examination of Guardiola's side's credentials in defending their title.