Manchester United took advantage of Fulham's defensive woes as Jose Mourinho's side found their attacking stride at last to stroll to a 4-1 win over Claudio Ranieri's side at Old Trafford.

The home side threatened from the off, with left back Ashley Young carrying the fight to Fulham from left back, displaying the desire of a captain to force his side forward. The England international cut inside to strike a delightful curling effort past Sergio Rico and into the top corner to put United 1-0 up just 13 minutes in.

It was not long before the home side went looking to test ​Fulham's withered defence once again, as ​United put together slick and incisive passes, the likes of which have not been seen from United in recent times, to ease their way through the visitors' defence. ​Juan Mata was on hand to steer home ​Marcus Rashford's cutback with real simplicity just before the half an hour mark.

A similar training ground-like move was produced with half time approaching. The influential Mata turned from goal scorer to provider, linking up well with Jesse Lingard following a short corner before rolling the ball across for ​Romelu Lukaku to tap home for a much needed goal. Substitute Aboubakar Kamara replied for the visitors, converting a penalty on the 67th minute after referee Lee Probert gave the foul from Ander Herrera, who slid in on Kamara and appeared to win the ball. However, just a minute later Andre-Frank Zambo Anguissa was sent off after picking up his second yellow card for a foul on Rashford.

Rashford restored United's three-goal lead late on, producing a venomous strike from outside the box to beat Sergio Rico at his near post.

With a more positive team selection from Jose Mourinho for this match, United's enhanced attacking setup paid dividends. Mourinho often opts for a tight midfield three behind the front line, which typically leaves the midfield disjointed from attack. However, with Marcus Rashford and Jesse Lingard operating in the wide areas and Juan Mata in his favoured number ten role, United looked far more dynamic and creative. The advanced three in behind the striker offered the home side greater fluidity in their attacking transitions and gave greater support to Romelu Lukaku up front.

The results of the tactical switch suggested that if United are to climb up the Premier League table this term, such positive and attacking intent must become Mourinho's revised blueprint.

STAR MAN - Ashley Young proved his worth as United's captain with an inspired performance from left back. The veteran showed good work rate and intensity to roam up and down the left flank, often taking the initiative in carrying his side's attacking threat to the opposition. The United skipper set the tone for a much improved performance from his side.

Ashley Young, take a bow! He cuts inside from the left and unleashes an unstoppable strike into the corner#MUNFUL

WORST PLAYER - In contrast to his vastly more experienced full back partner on the left hand side of defence, Diogo Dalot struggled to impose himself from right back to parallel the performance of Young on the opposite flank. The young Portuguese defender had only made two Premier League appearances prior to Saturday's match, and his lack of experience in the English top flight was evident at Old Trafford.

The quick-fire rate of United's two opening goals reflected Fulham's position as a team very much in transition under a new manager. Ranieri is renowned for implementing his disciplined and resolute style on his teams, but Fulham are clearly in the slow process of adopting their new manager's style. 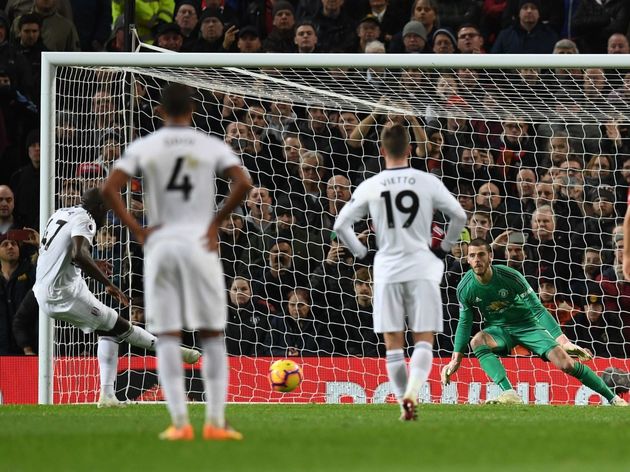 The west Londoners were far too open and lacking in positional awareness during the first half, allowing United's pace and power in attack to breeze through the Fulham backline at ease and open up chances that the home side simply could not miss.

United may have shown their quality, but they also benefited from a Fulham defence which is in great need of organisation and stability.

Game on! Aboubakar Kamara is felled inside the box, dusts himself down and puts away the penalty#MUNFUL

STAR MAN - Luciano Vietto only came into the match from the start of the second half, but the Argentine forward gave Fulham a greater sense of purpose and invention in attack. Aleksandar Mitrovic was far too static and ineffective in the first half, but Vietto's movement and direct runs gave United's defence more to think about after the interval.

WORST PLAYER - Denis Odoi had his work cut out at right back for Fulham up against Marcus Rashford and the overlapping runs of Young, and the Belgian certainly did not rise to the challenge. The pace and power of the England duo down United's left flank was simply too much for Odoi to live with, though Odoi was part of a defensive unit which was all at sea against United's powerful front line.

Manchester United's big week of action continues with a trip to Spain on Wednesday as Mourinho's side take on Valencia in their final game of the Champions League group stage. With five points separating the two sides in the group, United are already qualified for the knockout stages, and still have an outside chance of catching Juventus to finish as group winners.

The Red Devils then face a huge trip to Anfield next Sunday to take on Jurgen Klopp's high-flying Liverpool side in the Premier League, in a clash which both sides have a great deal to play for. With Liverpool pushing for a title challenge and United struggling outside the top four, the rivalry between the sides is likely to be in red hot form. 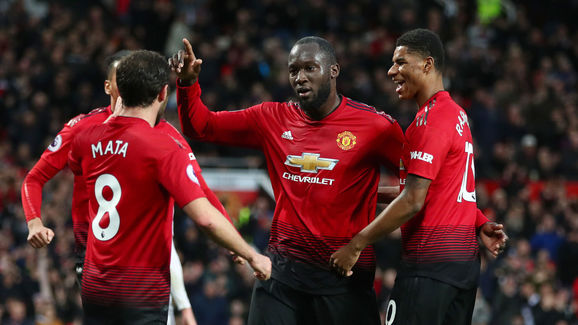 Fulham, meanwhile, can focus on salvaging their league campaign in their upcoming fixtures, with a London derby at home to West Ham on the agenda next Saturday, before Ranieri's side travel to face Newcastle the following weekend.