It took less than seven minutes for Borussia Dortmund to take the lead to in the derby. The Black and Yellows have been famed for the free-flowing football this season, but their opening goal came courtesy of a smart set-piece routine which was finished off by 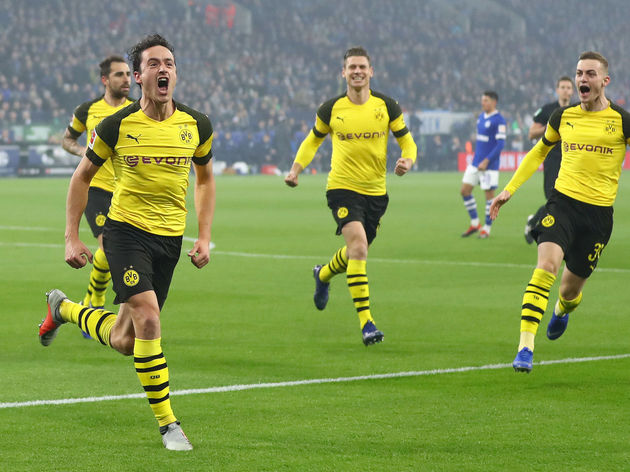 Don't you just hate it when fans start moaning about injuries as an excuse for losing a local derby?

Well, in Schalke's defence, they might just have a point. Coming into the match,

Guido Burgstaller goes off injured, so Schalke now have Weston McKennie (midfielder) and Hamza Mendyl (left-back) playing as their two strikers in the Revierderby. #S04BVB

Hamza Mendyl is coming on for the injured Burgstaller. Schalke with a true centre-forward now. Maybe that helps them? #s04bvb

So I don’t get why Tedesco would not sub in Konoplyanka for Burgstaller as Mendyl is playing in the striker position. If your team's best player was taken off the pitch after 37 minutes, you know it probably wasn't your day.

For Schalke, the few promising moments they had came thanks to the unselfish work of their only recognised striker,

Schalke certainly weren't at their best on Saturday, but no one was more anonymous than midfielder

Lucien Favre's side have been making a name for themselves this season as a free-flowing, counter-attacking team who can blow sides away.

Delaney with a free header. What a start Dortmund! #S04BVB

That Delaney header for Dortmund was sooo easy

What a start for Dortmund!! Thomas Delaney free header from 6 yards out!! #S04BVB

During their biggest game of the season so far, however, Borussia Dortmund were able to get the upper hand in the match thanks to a smart set-piece routine.

One thing fans always look for is someone who knows exactly what it means to play in the biggest derby of the season. In Marco Reus, Borussia Dortmund have exactly that.

The Germany international showed all his usual technique and class that we've come to expect from him over the years, but Reus steps up his tenacity against Schalke and he seemed to play at 110% against Dortmund's local rivals. He provided the assists for Dortmund's opening goal and popped up across the front three as he looked to find a winning goal throughout the second half. Reus was ultimately unlucky not to get on the scoresheet himself too, failing to find a way past Ralf