On a personal level, Modric had already been named UEFA Men's Player of the Year, won the Golden Ball at the World Cup as the tournament's best player and had been awarded the Best FIFA Men's Player prize prior to collecting his Ballon d'Or gong on Monday. 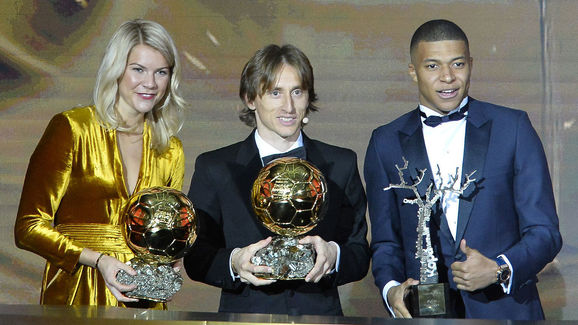 Modric is currently partnered with Nike and, according to Spanish publication El Confidencial, the American sportswear giant are set to reward the Croatian with an €800,000 bonus.

Nike are seemingly looking to cash in on Modric's success and build a campaign around him by releasing items such as limited edition boots to commemorate his achievements.

Modric has ended the Ballon d'Or dominance of Cristiano Ronaldo and Lionel Messi, with the iconic pair creating a duopoly on football's most prestigious individual prize since 2007 when Kaka won.

Ronaldo finished second in the standings, ahead of Antoine Griezmann and Kylian Mbappe, while Messi finished a distant fifth, his lowest placing since 2006.

Modric and most of Real Madrid's other stars were rested on Wednesday for the Copa del Rey win over lower league Melilla. The second leg clash was won 6-1 by Los Blancos, with Marco Asensio, Isco and Vinicius Junior among the scorers, resulting in a 10-1 aggregate victory. Real will be back in action in La Liga on Sunday when they travel to Huesca.