Rottenham manager Mauricio Pochettino revealed that his chief scout was at Liverpool vs Everton on Sunday, instead of their North London derby defeat to Arsenal.

Pochettino said that Steve Hitchen was at Anfield to see Liverpool’s dramatic victory, despite Tottenham playing earlier that day. Spurs ended up losing as the Gunners won 4-2 thanks to goals from Pierre-Emerick Aubameyang, Alexandre Lacazette and Lucas Torreira. The ​Tottenham manager mentioned Hitchen when speaking about Arsenal’s post-match celebrations, which were posted widely by the players on their social media accounts.

As quoted by Football365, he said: “[Our chief scout] Steve Hitchen was at the Liverpool game against Everton and was watching our game before in the stadium. When Arsenal scored the third goal all the Liverpool fans celebrated, like Arsenal celebrated after.”

When asked why Hitchen was at Anfield instead of the Emirates, Pochettino jokingly replied: “There is maybe a big surprise in January!” before explaining, “he went to enjoy the entertainment, the experience.” After ​Arsenal’s victory, there were many videos on social media of the players celebrating. Although it was a bitter defeat to take, Pochettino saw them in a positive light, saying: “When people celebrate like this, it’s because they respect you and see you as a big club.

“When we arrived here five years ago, the derby was a little bit ‘well it’s normally Arsenal always above Tottenham.’ But now the last two seasons we were above, and how they celebrate, of course it’s a derby but you start to see [those social media posts].” 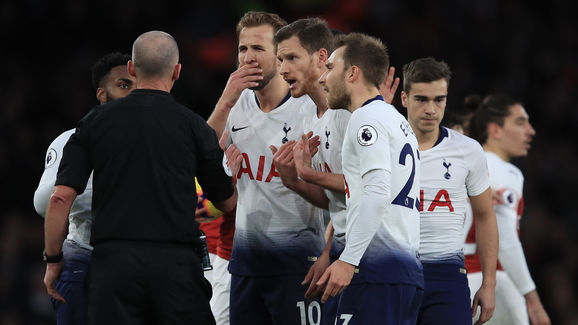 Pochettino added: “It was a massive win for them, of course, and for us it was a massive disappointment – but it showed the respect that we got in the last few years with our performances, with our results.”

Tottenham are back in action on Wednesday night, when they host struggling ​Southampton at Wembley.