​Stoke City midfielder Joe Allen has said that Derby's Bradley Johnson did not bite him in Wednesday's Championship clash between the two sides, despite viral footage leading many to believe otherwise.

Allen's Stoke eventually won the match 2-1, but the biggest talking point came in the first half, when Johnson appeared to bite Allen's shoulder in the fracas that followed Oghenekaro Etebo's red card - with videos and images of the incident sparking social media outrage.

But former Swansea and Liverpool midfielder Allen says, as quoted by ​The Sun, that those accusing Johnson have the wrong end of the stick.

“People asked me at half-time what had happened and suggested I’d been bitten, but to clear it all up, that didn’t happen," he said.

“He might have caught a bit of my shirt but I think we can lay that one to rest.”

The game settled down a touch after all the madness, with on-loan Liverpool winger Harry Wilson equalising after Sam Clucas had put ​Stoke into an early lead, before Tom Ince scored the decisive winner for the 10-man Potters mid-way through the second half. 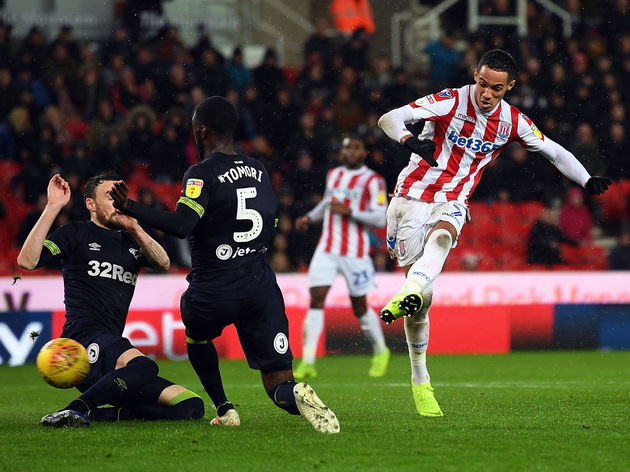 The win means that Stoke climb to 12th in the ​Championship table as they give chase for an immediate return to the ​Premier League, while ​Derby drop to 7th, out of the playoff spots and behind rivals Nottingham Forest on goal difference.