Liverpool have it all to do in their final Champions League group game as their 2-1 defeat to Paris Saint-Germain means the Reds are on the brink of an early exit. ​

PSG started the better of the two teams, with Alisson called upon early on to palm away Angel Di Maria's dipping volley, however the Brazilian could do nothing about the French side's opener after 13 minutes, as Juan Bernat picked up the loose ball following a cross, before his deflected effort went in at the near post to give the hosts a deserved lead.

In a game @PSG_English really must win, they’ve started strongly and now lead through Bernat.

Despite their enterprising start, the Parisian club were fortunate to keep all 11 players on the field after 25 minutes, as a Marco Verratti challenge on Joe Gomez, which resulted in a yellow card, could've been a red.

PSG could've be out of sight in the first half had it not been for Alisson, who did well to deny Edinson Cavani on two separate occasions, although the second of his saves fell to the feet of Neymar, who tucked in the rebound on 37 minutes and double Thomas Tuchel side's lead.

Liverpool however were handed a lifeline on the stroke of half-time in the shape of a penalty, as Di Maria hauled down Sadio Mane inside the area with a rash challenge, giving James Milner the chance to

HALFTIME: PSG head into the break with a one-goal lead. #PSGLFC

Marquinhos gave the Reds a scare at the beginning of the second half, although his goal was correctly ruled out for offside, although Liverpool couldn't quite trouble Gianluigi Buffon in the PSG goal, while Alisson at the other end had to be alert to keep Marqhinhos' header out in the 70th minute.

Despite plugging away until the final whistle, Liverpool couldn't find an equaliser, as PSG earned a vital win to aid their hopes of reaching the last 16, while Napoli's 3-1 win against Red Star Belgrade in the other Group C game means the Reds need to beat the Serie A side 1-0 at Anfield or by two clear goals to progress to the knockout stages.

Much has been made of PSG's domestic form compared to their performances in Europe, however Thomas Tuchel's side gave a mature performance against Liverpool when the pressure was really on, meaning they now control their own fate in the Champions League. Setting up with a 4-4-2, the French side had a solid shape defensively, while their attacking play was at times too much for the Reds to handle.

What was more impressive however was they way they managed the game throughout the 90 minutes, as Jurgen Klopp's side rarely threatened Buffon's goal, to give Tuchel's side a priceless three points in Group C.

The experience of Thiago Silva at the back for PSG was vital, as the Brazil international was as solid as can for the Parisian club all evening.

Whether it be with his heading, blocking or tackles, the centre back was on hand to snuff out any potential threat from the visitors, with his efforts at the back pivotal in PSG securing a crucial win.

You’ve just got to love 2 defenders celebrating excellent pieces of defending. Great show of passion from Thiago Silva and Marquinhos

While Di Maria didn't cover himself in glory for the challenge that resulted in Liverpool's penalty, Prensel Kimpembe was caught out a few times at the back, and was fortunate that his lack of urgency on the ball, sometimes inside his own area, didn't result in a goal for the visitors.

It proved to be another poor night for Liverpool on the road in the Champions League, as an insipid display means there's plenty of work to do at Anfield in their final game.

There was a lack of urgency all over the field from Jurgen Klopp's side, compared to their French counterparts, with their defending leaving a lot to be desired, while their was no fluidity or genuine threat in the attacking third, as the PSG goal was rarely troubled over the course of the game.

Liverpool had never all three Champions League away group in a season prior to the 2017/18 edition, however the Reds simply haven't been good enough on their travels in Europe.

STAR MAN
​
​Had it not been for the efforts of Alisson in goal for Liverpool, especially in the first half, then PSG could've been out of sight by half time. 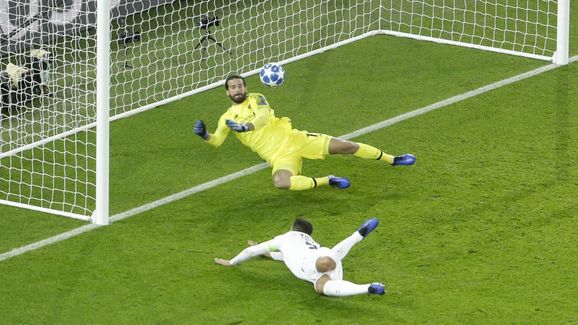 Doing well to deny Di Maria and Cavani, twice, in the first period, before producing a smart stops to keep Marqhinhos' header and Neymar's free-kick in the second half, the Brazilian keeper had a solid night at the Parc des Princes.

Alisson has kept us in the game! Double handedly

Alisson Becker take a bloody bow son. What a great reactive save #PSGvLFC

There were plenty of candidates for this unwanted award in a red shirt, however Dejan Lovren, who was brought in to give Liverpool some defensive solidity, had a tough night.

He, Joe Gomez and Vigirl van Dijk didn't cover themselves in glory for PSG's opening goal, while the Croat was caught out by the pace of Kylian Mbappe in the build-up to their second goal, although he was one of many players for Jurgen Klopp's side that had a below-par evening in the French capital.

Dejan Lovren trying to defend Neymar, Mbappe and Cavani, with the mobility of that giant cow. pic.twitter.com/ReDgBp93tT

Dejan Lovren should have been binned 3 seasons ago, he has been awful tonight! Absolute pony #LFC

PSG face an away trip to Bordeaux this weekend when they return to Ligue 1 action, while their final Champions League group game against Red Star Belgrade presents a great chance for the French side to reach the last 16.

Liverpool meanwhile have the small matter of a Merseyside derby this weekend when they welcome Everton to Anfield, before their final Champions League group game against Napoli at home has now taken on greater significance.