Ten-man Atletico Madrid secured their place in the last 16 of the Champions League after punishing Thierry Henry's youthful Monaco side at the Wanda Metropolitano stadium.

The Ligue 1 side got off to the worst possible start when Koke's shot took a heavy deflection off 17-year-old defender Benoit Badiashile to give Atletico the lead just 90 seconds after kick-off. In a frantic opening period, ​Thomas Lemar's free-kick just five minutes later almost doubled the Spanish side's lead, but the Frenchman's effort brushed the outside of the post. Diego Simeone's men however did open up a two goal advantage mid-way through the first half as Angel Correa's slaloming run left Jemerson on the floor inside the penalty area. The Argentine kept his composure before picking out Antoine Griezmann to calmly slot home and essentially put the game to bed.

With the game drifting away however, Stefan Savic was adjudged to have handled the ball inside the area in the 80th minute and was shown a controversial second yellow card. Former Los Rojiblancos hero Rademel Falcao stepped up but put his penalty wide, with his miss virtually summing up what was a disappointing night for Henry's struggling Monaco.

After suffering the disappointment of seeing Ousmane Dembele snatch ​Barcelona a 90th minute equaliser in La Liga on Saturday, ​Atletico seemed to pour out all their anger and frustrations on a vulnerable Monaco side. They were relentless from the first whistle and showed an intensity and dynamism that made them well worth their resounding victory.

With their major European rivals all seemingly showing signs of weakness and inconsistency, Diego Simeone's side could make a convincing argument about being the current favourites to win the Champions League. After their heart-breaking Champions League final defeats to fierce rivals ​Real Madrid in both 2014 and 2016, this year could finally be Los Rojiblancos' time to put their hands on European football's biggest trophy.

Antoine Griezmann has been directly involved in 5 goals in 5 Group A games for Atlético this season (4 goals, 1 assist). #UCL pic.twitter.com/6O72RYg6x8

Whilst his exquisite touches and dribbling were to be expected, Griezmann's willingness to track back and make tackles highlighted how the Frenchman has embraced the role of star man for Diego Simeone's side.

WORST PLAYER - Facing his former club, ​Thomas Lemar would have been the Atletico player most wanting to impress. However, in another ineffective display for Diego Simeone's side, the £52.7m summer signing from Monaco was hauled off after just an hour on Wednesday. Despite hitting the woodwork in the first-half with a fine free-kick, the French winger drifted out of the game and found himself on the periphery of a great team performance.

After suffering a wretched start to life as Monaco manager, Thierry Henry recorded his first win in charge when his side sneaked past fellow Ligue 1 strugglers Caen 1-0 at the weekend.

Against Atletico, the former ​Arsenal striker would have hoped to carry some much-needed momentum and confidence earned from their Ligue 1 victory. However, the Frenchman was left to rue the cruelty of football management as his young side fell behind to the most unfortunate of own goals inside the opening two minutes, and never really looked like getting back into the game. 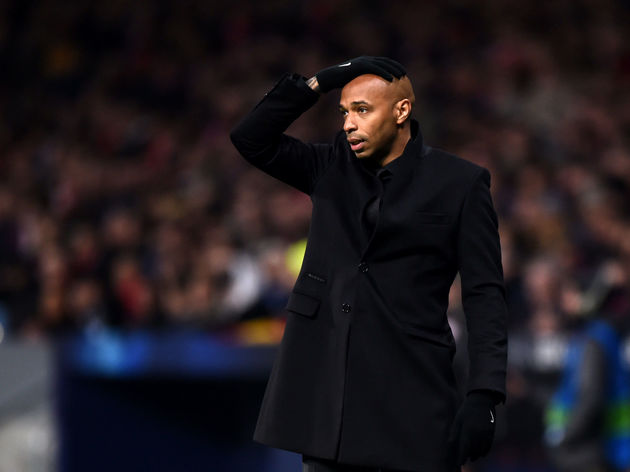 A combination of injuries to key stars and a questionable summer recruitment drive has essentially robbed the France forward of being able to field his strongest starting eleven this season.

Henry was forced to field four teenagers against Diego Simeone's side, including two 17-year-olds, and Atletico were ruthless in punishing their opponents youth and inexperience.

STAR MAN - In another poor team performance for Monaco, 17-year-old Han-Noah Massengo can hold his head up high. With just three previous senior appearances to his name, the young Frenchman was always keen to drive his team forward and never shirked away from wanting to the receive the ball in difficult areas.

Says a lot about the state of Monaco's squad (and the performances of some first team players) that Thierry Henry currently has 5 players who could be playing U19s on the pitch, including three 17 year olds (Massengo, Thuram-Ulien, Badiashile). #AtletiASM #ATLASM

WORST PLAYER - After starring in Russia's run to the quarter-finals in this summer's World Cup, Aleksandr Golovin earned a big-money move to Monaco from CSKA Moscow.

With a young side around him, the Russian would have been expected to take control of Monaco's midfield but was often overrun in the middle of the park and was virtually anonymous throughout the game.

With qualification to the last 16 of the Champions League secured, Atletico will turn their attentions back to La Liga as they take on Girona at the Estadi Montilivi on Sunday.

Just two points behind league leaders Barcelona, Simeone will have been pleased that his side made light work of their French opponents on Wednesday as Los Rojiblancos chase a ​La Liga and Champions League double this campaign.​