​Newcastle recorded their third successive Premier League win on Monday night at Turf Moor. A Ben Mee own goal and Ciaran Clark header meant Sam Vokes' strike counted for nothing as the visitors held on to record a 2-1 victory.

The kick off at Turf Moor was ​delayed by 30 minutes due to referee assessor Eddie Wolstenholme collapsing before the game. However, despite the delay, fans in attendance didn't have to wait too long for a goal, as a Federico Fernandez strike took a big deflection off Mee, sending the ball out the reach of 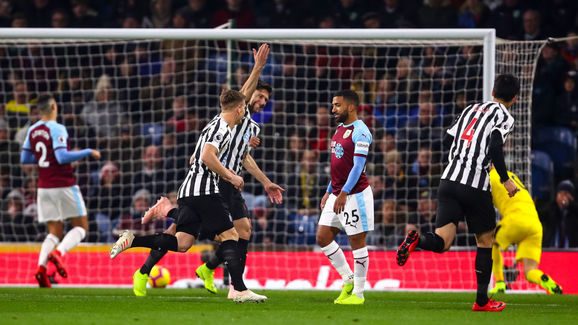 Despite responding well following the early setback, Burnley found themselves two goals down after 23 minutes, with Clark making the most of the space afforded to him inside the area to head home Matt Ritchie's in-swinging cross.

The hosts did enter the interval with the deficit halved however, as Sam Vokes header from the edge of the area looped over Martin Dubravka in the 40th minute.

Following the goal, the Newcastle goalkeeper did well to palm Chris Wood's stinging drive effort in added time to preserve the Magpies' slender lead at half-time.

Newcastle almost restored their two-goal cushion four minutes into the beginning of the second half. However, Ritchie somehow managed to find the side netting with the goal at his mercy, in what will go down as one of the misses of the season.

In a frantic end to the game, Wood spurned a hat-trick of chances to get his side back in the game, Newcastle substitute Joselu slammed an effort against the post and Vokes could only head over in the final minute of added time. 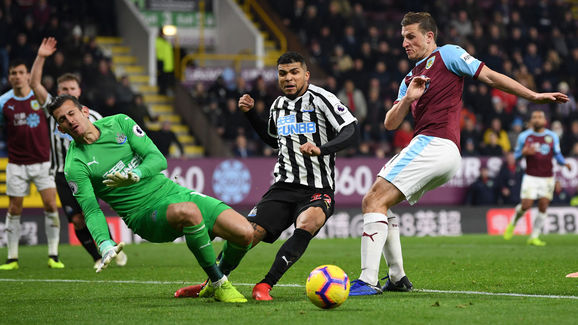 A lack of quality in the final third was Burnley's downfall against Newcastle, as the hosts wasted several clear chances to get something from the game.

Wood was the biggest culprit, as the New Zealand international lacked the composure to finish a number of opportunities that came his way.

Few stood out for Burnley at Turf Moor. However, Vokes' stunning header in the first half was the home side's only moment of genuine quality in the entire game.

Managing to loop his header from the edge of the area over Dubravka, the Wales international gave his side hope, and almost sent them home with a point right at the death, but couldn't quite direct his header on target.

17.65 - Sam Vokes' goal was scored from 17.65 yards out, the furthest distance for a headed Premier League goal since Jamie Vardy for Leicester against Sunderland in August 2015 (18.03). Neck. pic.twitter.com/vWDi3H9EsP

Chris Wood had a night to forget against Newcastle. The Burnley forward wasted several chances that, in the end, proved costly for his side, with the striker l

Chris Wood couldn’t have finished his tea tonight if you’d given him a baby portion. Good job too #BURNEW

Rafael Benitez opted to play a back five against Burnley, with the decision to do so a key factor as Newcastle recorded their third successive win.

The three central defenders coped well with what the hosts threw at them, as they stood firm to deal with the late aerial onslaught that ensued late in the game, while wing-backs Yedlin and Ritchie provided width for the visitors.

Ki Sung-yeung helped provided a shield in front of the defence to help protect the back line, as the Magpies managed to hold on for the three points.

Fabian Schar is proving to be a real hit at the back for Newcastle, with the Switzerland international producing another fine display in defence for Benitez's side.

The centre-back stuck to his defensive duties well all evening, while his quality on the ball should not be overlooked, as he proves to be another great piece of business done by Benitez despite the limited funds available to him.

Fabian Schar is a great bit of business by Rafa.

Fabian Schar - the best ball playing defender (in terms of passing at least) outside the top six? His vision and ability is something else. #NUFC #BURNEW

Fabian Schar...what a pass that boy has on him. #NUFC

The change to a back five meant Ayoze Perez had to play in a wide position, and the Spaniard failed to make any sort of mark in the game, with his most notable moment of the game being some unsavoury play-acting in the first half.

How many years will it take for Ayoze Perez to realise he’s no longer playing in the Segunda Division?

Both sides return to action at the weekend, with Burnley travel to face Crystal Palace, with Dyche's side now just one point above the relegation zone.

Newcastle meanwhile return to St James' Park, as they welcome West Ham United, a side that they have now moved level on points with following the win against Burnley.