Everton dominated a resilient and stubborn Cardiff City side, who defended resolutely for 90 minutes only to be undone by a second half

The Toffees bossed possession early on but were sloppy in the final third, and should have taken the lead just before the break when The breakthrough came when Theo Walcott was played in through the ​Cardiff defence and his shot was well saved by Etheridge, but parried it straight into the path of the ex-Swansea City man

​Everton were the better side throughout and deserved the three points but Warnock will feel his side could have taken something more from a game in which they were defensively sound. Andre Gomez, on loan from ​Barcelona, showed glimpses of why the Catalan giants paid £33m for his services from Valencia with a composed display at Goodison Park.

After missing the beginning of the season through injury, the Portuguese has now four consecutive appearances in an Everton shirt and is looking a top talent for the Toffees.

In the first half he was the best player on the pitch, with his 31 passes with an 87% accuracy, although in the second period he was much quieter. Where are the goals going to come from for Neil Warnock's men? The visitors started with a lone striker, Callum Paterson up front - who played for Scotland at right-back during the international break - but rarely troubled ​Pickford's goal. 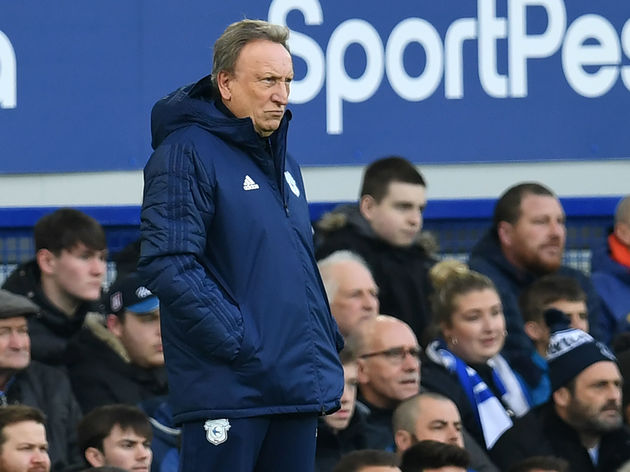 Victor Camarasa had the best chance, firing a shot towards the Everton goal which Pickford beat away for a corner.

Arguably, the Bluebirds should have been awarded a penalty with 12 minutes to go when ​Seamus Coleman bowled over Gregg Cunningham in the penalty area without even touching the ball and, in all honesty, a penalty was the most likely way onto the scoresheet for the Welsh side.

It's another fixture where Cardiff have failed to score away from home, and Warnock will surely be looking at a centre forward in the January transfer window.

No one in the Cardiff team played particularly poorly but it was a quiet game for Aron Gunnarsson, who is usually so instrumental in the middle of the park. He did provide the dangerous long throw-in which worried the Everton defence at times, but this was all the Icelander could really provide in a Cardiff City shirt at Goodison Park.

FT: It's 4️⃣ home @premierleague wins in a row for the Toffees!  #EFCmatchday pic.twitter.com/Hop4Ju3C7A

Next up for the Toffees is a trip across Stanley Park to take on Merseyside rivals Liverpool at Anfieldm which should be an exciting encounter.

Cardiff host fellow top flight newcomers Wolves at the Cardiff City Stadium looking to bounce back and out of the Premier League relegation zone.