​AC Milan are reportedly considering returning striker Gonzalo Higuain to parent club Juventus at the end of the season, with Milan struggling to afford the Argentinian's contract demands.

With Cristiano Ronaldo joining Juventus during the summer, Higuain was loaned out to Milan. The 30-year-old has been in impressive form this season, netting seven goals in his 13 appearances for Milan, and I Rossoneri have the option to sign Higuain permanently at the end of the season. However, according to Italian outlet ​Corriere dello Sport, ​Milan are currently likely to refuse the option to sign the striker, as they fear that the financial side of the deal does not make sense.

Milan paid around £16m to secure the loan deal for ​Higuain, and negotiated a future fee of £32m to sign the Argentinian permanently. Should they activate the option to sign Higuain, he would be contracted to the club until 2021, which would reportedly cost Milan a further £37m in wages.

His financial situation is compared to imminent new signing Lucas Paqueta. The Brazilian will move to the San Siro in January, and is set to earn £6m during his time at the club.

Milan are said to be keen to bring Higuain to the club on a permanent basis, and will likely attempt to negotiate a cheaper deal with ​Juventus. Should they fail in their attempts, Corriere dello Sport claim that Higuain will almost certainly return to his parent club.

Higuain is currently suspended for Milan after being shown a red card during the 2-0 defeat to Juventus. He will be keen to forget his performance, after also seeing a penalty saved by Wojciech Szczesny.

If Milan do opt to decline their option to sign Higuain, it could come as positive news for ​Chelsea. The Blues were heavily linked with a move for the 30-year-old during the summer, with both ​Alvaro Morata and ​Olivier Giroud struggling in front of goal. 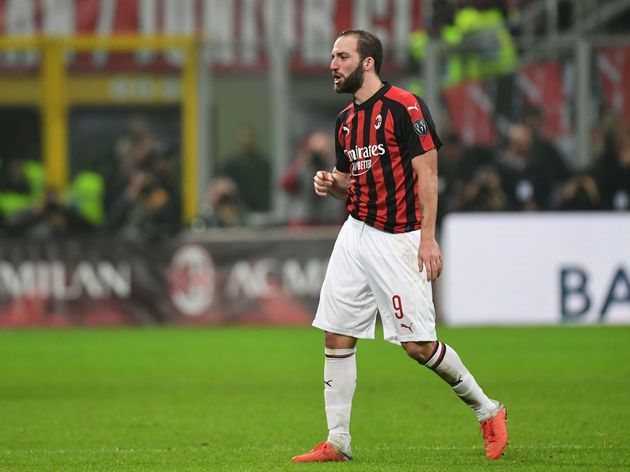 However, Morata's fortunes have drastically improved in recent weeks. The Spaniard has four goals in his last five ​Premier League matches, but manager Maurizio Sarri is rumoured to be looking for a new striker and could certainly be tempted by a move for Higuain.