​Former Premier League striker Dieumerci Mbokani has spoken of his regret of turning down a move to Liverpool eight years ago.

The Congolese striker is now in Belgium with Royal Antwerp, after joining on a free transfer from Ukrainian side Dynamo Kiev this summer. However when he was at fellow Belgian club Standard Liège in 2010, he had the opportunity to sign for the Reds. Speaking to Belgian newspaper Het Nieuwsblad, Mbokani said: “When I played at Standard [Liège], I had the choice between Monaco and Liverpool, but that turned out badly.

“If I had gone to ​Liverpool I might have had a career as [Samuel] Eto’o or [Didier] Drogba. Because I felt that with my qualities I must not be inferior to those two.”

Although Liverpool were reportedly very eager to bring Mbokani to Anfield, he opted to sign for Monaco in 2010. He scored just one goal in ten appearances at the Stade Louis II, returning to Belgium the next year joining Anderlecht. The 32-year-old has played in six different countries during his career, including stints in the Premier League. When at Dynamo Kiev he was loaned out to ​Norwich City and ​Hull City in 2015 and 2016 respectively.

In his two seasons in England Mbokani was relegated on both occasions, scoring seven goals in 41 total appearances. Today he is a largely forgotten figure in England, having never really left his mark on the Premier League. 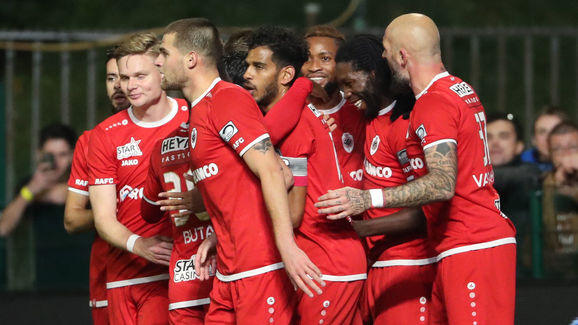 Mbokani has started well for Royal Antwerp since joining, with four goals and six assists in ten appearances. They sit third in the Belgian First Division A, behind Genk and Club Brugge.