​Borussia Dortmund wonderkid Jadon Sancho has been named as the Bundesliga's Player of the Month for October, after a string of impressive performances for Dortmund.

The 18-year-old has been in sublime form for Dortmund, racking up five goals and eight assists in 17 appearances for Die Borussen. Sancho's impressive form since leaving Manchester City in 2017 has also earned him a call up to Gareth Southgate's England side, with Sancho making his first start for the club in Thursday's 3-0 victory over the USA.

The time has finally come... 論

After an incredible month with @BlackYellow, Jadon Sancho has been named October's #BundesligaPOTM 

The ​Bundesliga revealed the news of Sancho's reward on ​Twitter, describing Sancho's form during October as "incredible".

In his three Bundesliga appearances during October, Sancho managed to find the back of the net three times, whilst also contributing an assist to Paco Alcacer during Dortmund's 4-3 victory over Augsburg.

He grabbed both of his side's goals during the 2-2 draw with Hertha BSC, and his form has been a key factor in Dortmund's rise to the top of the league table.

​​October was certainly a special month for Sancho, who also made his England debut midway through the month. He was a late substitute during England's 0-0 draw with Croatia, before being handed his first start for The Three Lions against the USA.

The youngster was superb on his first international start, even creating a goal for teammate ​Trent Alexander-Arnold. If Sancho can maintain his current level of performances, he will certainly be making more appearances for his country in the near future. 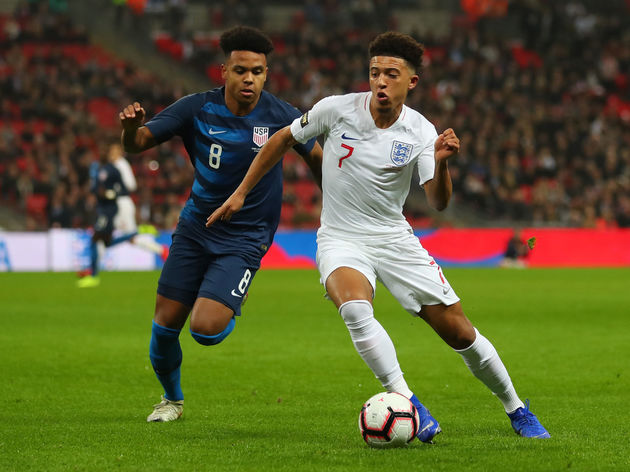 His electric form has seen him linked with a return to ​City, whilst the likes of ​Manchester United. ​Chelsea and ​Liverpool have also been touted as potential suitors for Sancho.

However, ​Dortmund are said to value Sancho at around £100m, as they seek to ensure Sancho continues his upward trajectory at the club.