​Southampton manager Mark Hughes has blamed the officials for disallowing Charlie Austin's goal that he believes cost his side a win during ​their 1-1 draw against Watford.

Jose Holebas' late strike in the second half cancelled out Manolo Gabbiadini's first half opener, however both teams saw decisions go against them, with the Saints, who were leading 1-0,  seeing Austin's strike ruled out as Maya Yoshida was adjudged to be interfering while in an offside position.

The goal had been initially given, before referee Simon Hooper consulted his linesman, Harry Lennard, to disallow the goal, leaving Hughes frustrated with a decision that meant ​Southampton's wait for a first home win of the season goes on. 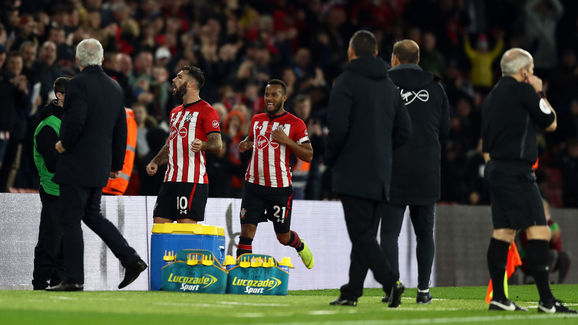 "A clear goal and not one of their players appealed for offside, we are celebrating it is 2-0 and the game is over in my view.

"At that point at 2-0, we would clearly have just seen the game out and won the game."

The result sees Southampton drop one place to 17th in the ​Premier League, with their goal difference keeping them outside the relegation zone.

It proved to be a difficult game for Hooper, as the referee also failed to award ​Watford a penalty for Ryan Bertrand's foul on Nathaniel Chalobah in what was his fourth Premier League game in the middle, with Hughes questioning the decision for his team to be given a referee with little experience.

Spoken from the heart after today’s game, thats what the interview are for not to sit on the fence yes we all make mistakes but today was a costly one and @SouthamptonFC should of won the game.