Former Liverpool winger Jermaine Pennant has revealed that Steven Gerrard really did tap him up and played a huge part in his joining the Reds.

Pennant joined the Anfield side in 2006 and spent three years on Liverpool's books. But he might have never ended up there had it not been for the former skipper. 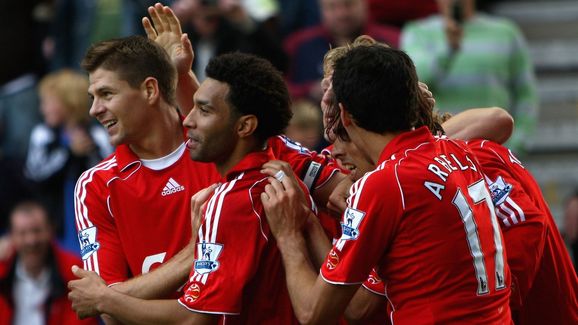 "I was trying to focus on the game!

"Straight after the match, I told Sky about it. Obviously, a move to Liverpool eventually came about." Asked about his relationship with Gerrard and Jamie Carragher, the top players in the dressing room, Pennant admitted he wasn't exactly best friends with the pair but there was always respect.

"I got along with them fine - they knew I was a bit crazy," he said. "We weren't best pals, but we got along and I respected them. We were just team-mates."

Of course, he was also questioned over the talk of him running a nightclub in his garage during his Liverpool days.

Jermaine Pennant: “I was playing for Birmingham against Liverpool at St Andrew's and Gerrard said to me; 'Who is your agent?' while the game was going on.” https://t.co/UdB5hpjyyU

"My driveway was so big you could park 11 cars on it, and I had a little arch there with a roof on it, which is where I set up a nightclub," he replied.

"I had a sign above the door saying 'Players Lounge', and a DJ booth and a bar. We always went back there after a night out in Liverpool."