The former Premier League title winner is a free agent at the moment and is available to play once more after serving an 18-month suspension for contravening doping laws in 2016. With the 31-year-old looking for a new club, ​Mirror Football have reported that ​West Ham have expressed an interest in the former France international to provide further back-up to a squad that has been ravaged by injuries this season.

Manuel Pellegrini's side will be without summer signing ​Andriy Yarmolenko for the season after the Ukrainian suffered an Achilles injury, whilst the likes of ​Manuel Lanzini, Carlos Sanchez and Jack Wilshere have all had disrupted campaigns.

Samir Nasri loved a big game, his goal against Chelsea in 2012 in a must-win game, another one vs Chelsea in the FA Cup semi, that goal vs Sunderland in the cup final, that screamer vs Roma

Nasri won the ​Premier League twice during his time at the Etihad Stadium with ​City, and played under the current Hammers boss when the Chilean replaced Roberto Mancini as manager.

The Frenchman praised Pellegrini's style of coaching and was an instrumental part of the Manchester City side that won the league in 2013/2014, scoring the opening goal in the title-clinching 2-0 win over West Ham. 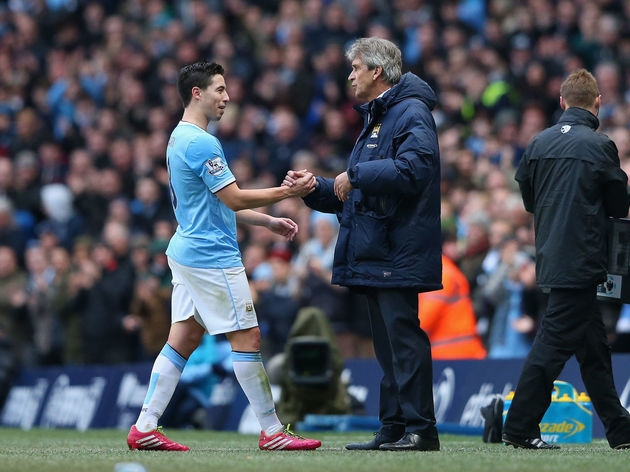 After Pellegrini's departure, Nasri fell out of favour at the Etihad and after spending six seasons in Manchester, Nasri left the side permanently in 2017 and joined Turkish Super Lig side Antalyaspor. However, the midfielder made just eight appearances for the side before leaving at the end of the season, but is now seemingly linked with a move back to English football.  ​