Jose Mourinho defended a provocative gesture that he made in the direction of Juventus supporters after Manchester United shocked the Italian champions with a come-from-behind victory in Turin.

Two goals in the last five minutes gave the Red Devils a crucial 2-1 victory that puts them on the brink of qualifying for the knockout stages of the Champions League.

​United played adventurous football from the first whistle and Mourinho was full of praise for how his players had applied his instructions.

Say what you like about Mourinho’s cupped-ear celebration, and it was funny and crass, pots and kettles, but the real focus should be on his brilliant game-management, his vital substitutions & pure defiance at the home of powerful opponents. Touch of the old Jose there. #JUVMUN

"We can’t be better than this, we came here to play against a team with different potential and objectives than us," he said, quoted by ​Gianluca Di Marzio.

"But since the first minute we tried to win and played a very positive match. We played with a more closed off midfield giving more freedom to ​Alexis Sanchez and trying to take Chiellini and Bonucci away from the defence."

Mourinho, who had received abuse from ​Juventus fans for his Inter ties, raised a hand to his ear after the full time whistle at the Allianz Stadium, deliberately goading the home fans. 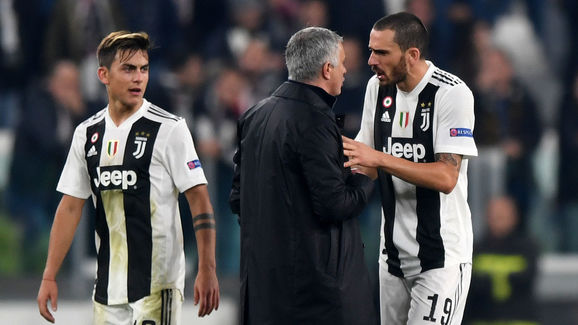 "I was insulted for ninety minutes, I do my work and nothing more," said the United boss. "At the end I didn’t insult anyone I just did the gesture that I wanted to hear them more.

"I wouldn’t do it again. But I came here as a professional that does his work and people insulted my family, this is why I reacted this way. I don’t want to think about it."

United will qualify for the knockout stages on matchday 5 if they beat Young Boys at Old Trafford and Valencia fail to beat Juventus in Turin.