Back From the Dead! Twitter Melts Down as Man Utd Stun Juventus & Win in Turin

Alright then, how the hell did that happen?!

Well, nobody's quite sure, but Manchester United have only gone and beaten Italian champions ​Juventus in their own back yard on Tuesday night.

They're many people's favourites to win the Champions League this season, they'd won 13 out of 14 games in this campaign prior to this game, they created chance after chance, but...again, Manchester United beat them. 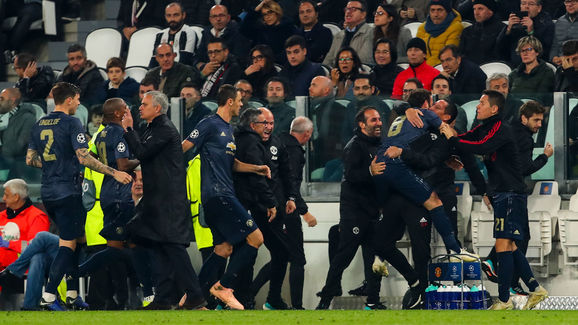 They hadn't lost a Champions League game at home since 2009. They have Cristiano Ronaldo, who, incidentally, scored an absolute banger.

But ​United, through a wonderful Juan Mata free kick and the scrappiest winner you'll ever see, have taken a huge three points, a huge step to the next round of the competition, and a huge dose of confidence ahead of this weekend's trip to Manchester City.

And what a way to do it! 

In truth, it was absolutely spectacular.

A weighted pass over the top from Leonardo Bonucci was met with a thunderous volley over the shoulder from ​CR7, who scored against his former club. He proceeded to celebrate by showing off his six pack, obviously.

Watching Cristiano Ronaldo celebrate a goal against us... #mufc pic.twitter.com/HNyEE9MRMW

Against the club where it all started. pic.twitter.com/2K4q9MNMAM

Even when he plays like a 33-year-old, Ronaldo still capable of ridiculous moments of magic. Wonder goal for Juventus against Utd.

United fans looking at Ronaldo whipping out his six pack to celebrate pic.twitter.com/Owhd3VVCQd

There was a general feeling that United were set to crumble after falling behind, even after a largely competent display and much higher effort levels than the reverse fixture a couple of weeks ago. Juventus wasted a host of chances, but Jose Mourinho, still the master tactician, lumped on Marouane Fellaini and Juan Mata for the final stages.

They were both instrumental - Fellaini for his sheer presence, Mata for his finesse. And with four minutes left, Mata curled in a sublime equaliser from a free kick.

Mata makes an impact off the bench for Manchester United with a special free-kick  pic.twitter.com/vmWGvuxyXS

Mata on - scored a free-kick
Fellaini on- caused absolute havoc

Jose got his subs absolutely spot on. Love the resilliance this team is showing in recent weeks. The United way! Bring on Manchester City! #mufc pic.twitter.com/WyeU692BvF

What a brilliant free kick from Juan Mata. The genius of Jose Mourinho’s substitution, as he’ll tell us all later. 

A point would have been lovely, but they weren't done there.

Even Martin Keown noticed - Man Utd's players believed they could win from there. And after another free kick, some bundling around in the box and a probable own goal...they managed to hit the front.

Blimey, the @ManUtd comeback machine is switched on again.

Spare a thought for Juventus fan and 90min's own Jack Gallagher, who counted his chickens too soon...

Juventus are lightyears ahead of this Man Utd side. Way too good.

And now, get a load of Jose Mourinho at his very, very, very best.

Juventus fans taunted him as the Bianconeri won at Old Trafford a couple of weeks ago, and he chucked it back in spades.

There was no way that Mourinho wasn't going to make the most of his side's dramatic comeback tonight!  pic.twitter.com/8kfOCz2lmK

Mourinho giving it large to the Juventus fans.  pic.twitter.com/o6JbvbG43t

Think this might be the best face Mourinho has ever pulled pic.twitter.com/2DIGKXoASW

Mourinho gets abused non stop, gives a tiny bit back and people lose their mind.

In 3 of their last 6 games in all competitions, Manchester United have scored winning goals in the 89th minute or later after trailing in each game. #MourinhoTime pic.twitter.com/LT42vwJ58L

Just when you think Juve seen everything... #MUFC #UCL pic.twitter.com/vmcaydXl4x

Next up, Manchester City away. And breathe.