Diego Simeone's ​Atletico Madrid side avenged their demons as they comfortably beat ​Borussia Dortmund at the Wanda Metropolitano stadium to move level on points with the German side in their Champions League group on Tuesday evening.

After suffering a humiliating 4-0 defeat in the reverse fixture, the onus was on Simeone's side to take the game to their German opponents and restore some pride. And after a cagey opening period, Atletico went ahead through a well worked goal midway through the first half. Picking up the ball inside the Dortmund half, Saul drove forward before laying it out wide to Filipe Luis. The left-back then cut the ball back towards the onrushing Spain international to guide home into the back of the net via a deflection off Manuel Akanji.

The goal seemed to spark life into both the crowd and the Atletico players, with Simeone's side virtually on top for the rest of the game. Thomas Partey went close when his long range strike grazed the crossbar, before Griezmann sealed the points for the home side with just ten minutes to go when he slid the ball past a helpless Burki after a swift Atletico counter-attack.

The biggest talking point coming into the game was whether Atletico Madrid would produce a performance more fitting of a Simeone side, after their humbling in the reverse fixture. If the Argentine manager wanted a response from his players, then he certainly got it. Atletico were everything that we have come to expect in recent years; dogged, intense and dynamic. Angel Correa in particular was impressive, both with his running off the ball and with it but was guilty of missing some good chances to score. With the scores still dangerously close at 1-0, star man Antoine Griezmann stepped up to seal the game for Atletico and once again proved why he is one of the most lethal finishers in world football.

With a win here, Atletico have put the pressure back on Dortmund in the race for top spot in the group and have well and truly banished those horrible memories at the Westfalenstadion.

STAR MAN - Saul was at the heart of everything good about Atletico and epitomised the Simeone spirit on the pitch. Putting himself into challenges, then getting forward to support the attack, the Spain international was a constant livewire and was rewarded for a fine performance by scoring his side's first goal.

9 - Saul Ñiguez has scored nine goals in the @ChampionsLeague , more than any other Spanish player since the start of 2015/16. Bravo. pic.twitter.com/S2N69nQKth

WORST PLAYER - With Diego Costa missing for the home side through injury, Nikola Kalinic was given the opportunity to make his mark and impress the manager.

Whilst his effort could not be faulted, the Croatian lacked the killer instinct that Costa possesses and failed to make the most of his chance up front for Atletico.

After producing their best performance of the season when they beat Atletico 4-0 at home, Dortmund came into this match knowing a point would have virtually guaranteed their qualification into the next round. 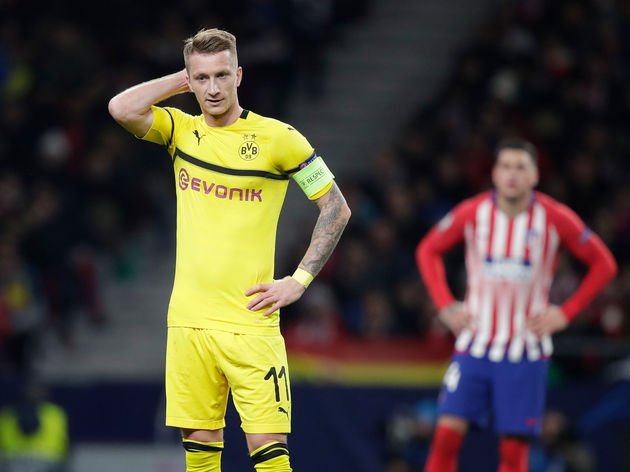 Lucien Favre's men therefore would be slightly disappointed that they were unable to get a result here, particularly after such a comprehensive victory back in Germany. While the result itself may have been expected, their performance was well-below par, with many of their key attacking players including English starlet Jadon Sancho failing to get involved.

STAR MAN - Achraf Hakimi, on loan from Atletico rivals, Real Madrid, was a constant attacking threat down the left flank and showed some impressive trickery from left-back. In a hostile atmosphere, the young Moroccan handled the crowd well and delivered a fine performance. After impressing in his short time at Dortmund, the full-back may well find himself back with his parent club sooner rather than later.

It has taken the Atleti crowd 45 minutes to realise that Dortmund’s left-back is Achraf Hakimi. On-loan from Real Madrid.

Now he is being jeered whenever he touches the ball.

WORST PLAYER - Sancho and ​Marco Reus failed to really impose themselves on the game when their side needed it, but USA international Christian Pulisic was virtually anonymous to the point his only meaningful contribution was when he came off in the second half.

Having restored some sense of pride with a win on Tuesday night, Atletico take on Athletic Bilbao in La Liga hoping to keep up the pace with leaders Barcelona. After defeat here, Lucien Favre meanwhile must pick his Dortmund side up for another huge match for his side as they take on rivals Bayern Munich in a first vs third clash in the Bundesliga on Saturday afternoon.