​Leicester City manager Claude Puel has expressed how proud he is of his players, as they ​beat Cardiff City 1-0 just a week after the death of club chairman Vichai Srivaddhanaprabha.

The Foxes took all three points thanks to a Demarai Gray goal, in what was an emotional afternoon at the Cardiff City Stadium. There were numerous tributes to the late chairman, including a message revealed on Gray’s base layer that read ‘For Khun Vichai’.

As quoted by LCFC TV, Puel said: “It was a difficult game to prepare for, of course, and I would like to congratulate all the staff and all the players of the squad.

That was for you, Khun Vichai. pic.twitter.com/6EUEjxRAjp

“They participated a lot and they kept a good feeling, they found a good balance between their emotions, aggressiveness and conviction on the pitch.”

Earlier this week the Leicester players chose to play today’s game instead of postponing the match, believing that their chairman would’ve wanted them to. Puel said: “All we wanted [was] to pay our tributes for the Chairman, and now we want to continue. He was close to everyone and it’s a good feeling to start this tribute with a win, of course.”

The celebrations at the final whistle were moving, with the players and staff going over to celebrate the win and commemorate Khun Vichai with the 3,000 travelling Leicester fans. 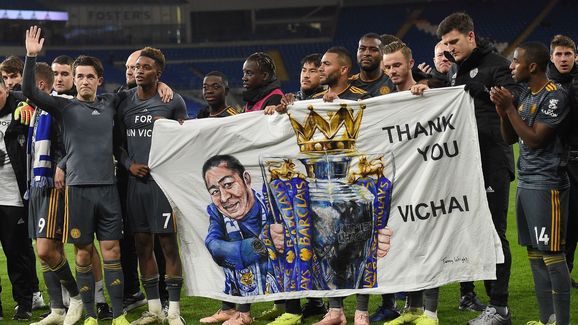 Puel added: “It was fantastic to share our emotion and to know our Chairman with our fans, staff, players. We won this game, I think we deserved to win. I am proud of my players because they gave their best in this condition, in this situation.”

The win saw the Foxes move up to 10th in the ​Premier League, after three straight league games without a win. The entire Leicester City squad will now travel to Srivaddhanaprabha’s home country Thailand for his funeral. Puel said: “First thing, the most important [thing] of course, we will go to honour our Chairman in Bangkok. We will come back in the middle of the week, with just two or three training sessions to prepare for this game against Burnley.”