​Goals from Mohamed Salah, Xherdan Shaqiri and a brace from Sadio Mane more than cancelled out Callum Paterson's second half effort as Liverpool ran out 4-1 winners against Cardiff at Anfield.

It took just ten minutes for Liverpool to take the lead, Salah on hand to score his fifth league goal of the season with a finish from close range following some last ditch defending from Cardiff to initially deny the home side. 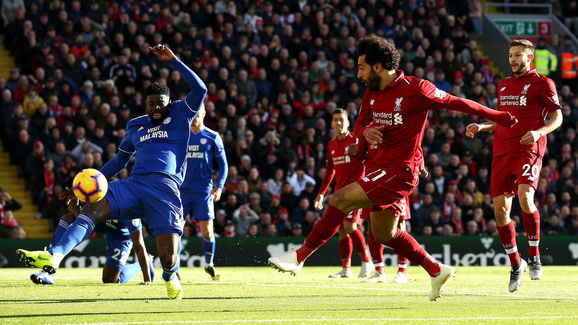 The hosts dominated the entirety of the first half, and had further chances to add to the scoreline, as Vigril van Dijk's header glanced off the post, while Neil Etheridge was alert to thwart Salah.

Neil Warnock's side almost had the perfect start to the second half when they had the ball in the net from a free kick, although Sean Morrison was adjudged to be offside in the buildup as he nodded his header back across goal.

Despite Liverpool failing to match the same intensity they played with in the first half during large spells of the second period, Sadio Mane gave the Reds the cushion of a 2-0 lead in the 66th minute, as he managed to find space in the area before firing past Etheridge in front of the Kop. 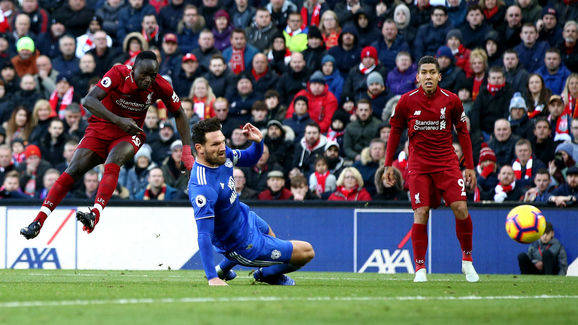 Jurgen Klopp's side were fabulous in the first half, although had only one goal to show for it as their performance wasn't being reflected in the scoreline until Mane's first goal.

Fortunately, Liverpool rallied and made sure of the win with two goals in the final six minutes, which their play ultimately deserved, especially for their intensity and dominance in the first half.

Mohamed Salah has definitely returned to form after a slow start to the season, as the Egyptian was instrumental in the win at Anfield.

With one goal and two assists, Salah was a threat all afternoon with his runs in behind or his involvement in the buildup, and looks like the man who starred for Liverpool last season.

• Another 3 points.
• Salah silencing his doubters, again.
• Mané is BACK.
• Shaqiri NEEDS to start.
• STILL unbeaten in the league.
• Top of the league.
• Arsenal next.

Have a good weekend.

Quality win, Salah returning back to form with 2 assists & a goal  Mane scoring 2, Shaquiri with a deserved goal.

Great performance especially when it became a little sloppy at 2-1.#LIVCAR #LFC #GreatWeekend

While Adam Lallana was given 61 minutes as he looks to build his fitness up, there was little to excite Liverpool fans during his time on the pitch.

The England international looked to make runs from midfield, although his touch was off and couldn't make a meaningful impact on the game before being substituted.

Adam Lallana contributes more to the team when he's injured

So many useless Cruyff turns that I just had to witness

Cardiff's game plan was clear from the off, as they looked to hang on for a point, but that had to change after just ten minutes.

While the tactics from Neil Warnock looked negative, especially when Mane made it 2-0, the approach kept them in the game – and when Callum Paterson made it 2-1 with 12 minutes to go, his decision to be defensive looked to have given them a chance.

Two quick goals in the final six minutes put an end to that, although Warnock wasn't exactly confident his side would get anything before the game.

Feeding off scraps for large parts of the game, Callum Paterson took his chance well in the second half, and was a willing runner for Cardiff all afternoon.

918 - Callum Paterson's goal for Cardiff is the first goal Liverpool have conceded at Anfield in the Premier League since February, ending a run of 918 minutes without conceding. Penetrated.

​WORST PLAYER
​
​Despite providing the cross for Cardiff's goal, Junior Hoilett provided little else during the game with him lacking the quality in the vital moments on too many occasions.

Liverpool face a tough trip to north London next weekend when they face Arsenal, while Cardiff play host to Leicester.