Brazil and Croatia are unmoved in third and fourth respectively, but England have continued their rise into the top five after a draw and win in the two competitive fixtures played this month. Argentina and Chile have fallen to 12th and 13th respectively, while Germany are now 14th after losing recent competitive games against Netherlands and France. Usually so strong, Die Mannschaft have lost six times in 2018 and have won fewer competitive games than Gibraltar. 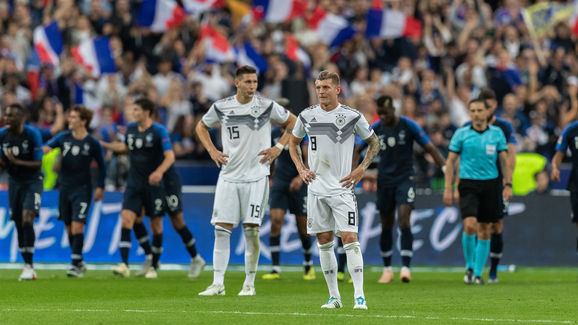 In the remainder of the top 20, the Netherlands are up to 15th, while Wales, Italy and Peru have climbed to 18th, 19th and 20th respectively. Mexico have dropped to 16th and Sweden to 17th.

Tunisia remain the highest ranked African nation in the global rankings in 22nd place, narrowly ahead of 25th place Senegal. Asia's leading country is Iran, who have risen three places to 30th.

The most improved country in the world from last month's FIFA list is European minnows Gibraltar, whose back-to-back Nations League victories over Armenia and Liechtenstein - their first ever wins in competitive fixtures - have seen them shoot up eight places to 190th.

The country with the unwanted worst mover tag is Mozambique, slipping nine places to 122nd.

The single worst team in the world this month is 211th ranked Turks & Caicos Islands.