Liverpool got their Champions League campaign back on track with a routine victory over Serbian champions Red Star Belgrade at Anfield.​

The Reds had a nervy start against the attack-minded Serbians and could have gone behind when a corner reached the foot of Srdan Babic, who couldn't direct his shot into the back of the net.

A deflected strike from Roberto Firmino after good work from Xherdan Shaqiri and Andy Robertson gave the Reds the lead and settled their nerves. Robertson should have doubled Liverpool's lead when he skewed his shot wide with a clear sight of goal, but Mohamed Salah provided a more assured finish after good play from Fabinho and Shaqiri.

19 - Since the start of last season, Roberto Firmino has been directly involved in 19 Champions League goals (12 goals, 7 assists), more than any other player. Trailblazer. pic.twitter.com/1jroPtDIkL

Liverpool were given the chance to extend their lead early in the second half as Sadio Mane went down dramatically in the area and Daniel Siebert pointed to the spot after some deliberation. Salah stepped up and smashed the penalty down the middle for his 50th Liverpool goal.

Another penalty was awarded in the 76th minute for handball, but Salah had just been replaced by Daniel Sturridge so was unable to complete his hat-trick. Mane stepped up and struck it well but Milan Borjan made an excellent save, diving to his right and pushing the ball onto the woodwork.

Mane's disappointment was short-lived as he made it four soon after. Sturridge showed good vision to find him in the box and the Senegalese forward ended his goal drought with a toe-poke beyond Borjan.

That was the final word on a very professional night for Liverpool.

After Saturday's sluggish win at Huddersfield, Jurgen Klopp would have been pleased to see his team emerge comfortable victors, particularly after Red Star made a good fist of it for the first 25 minutes.

This was a good game for Fabinho to make his first Champions League start for Liverpool. After a shaky start, he grew into the game and played a crucial role in the second goal before an assured second half display. 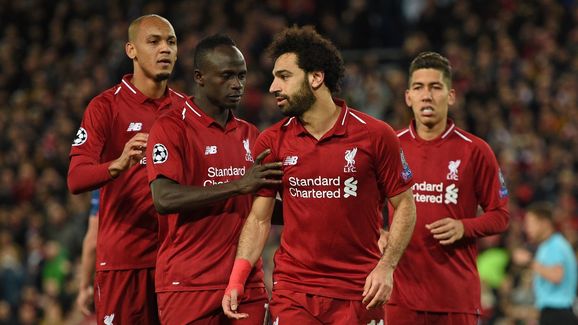 As for Mohamed Salah, he continues to prove that he is no one season wonder with a brace to take his season's tally to six. Even before his first goal, he was getting in good positions, and never let his head drop after a couple of bad misses.

The Huddersfield match, this one, and the game against Cardiff on Saturday always looked like a good opportunity for Liverpool's stars to get their eye in ahead of tougher fixtures to come. This felt like a night when it all clicked.
Player Ratings
Starting XI: Alisson (6); Alexander-Arnold (6), Gomez (6), Van Dijk (6), Robertson (7); Shaqiri (8*), Fabinho (7), Wijnaldum (7); Salah (8), Firmino (7), Mane (7)
Substitutes: Lallana (5), Sturridge (7), Moreno (N/A)
Star Man

Xherdan Shaqiri was by far the cheapest of Liverpool's summer signings but so far he has been the most effective, and this was arguably his best performance so far.

All about Shaqiri adding the creative spark this half as Salah makes it 2-0. Surely playing his way into a regular starting place. Perfectly weighs his passes.

Shaqiri tracks back, tackles, plays a boss through ball to Robertson who plays a boss ball into Firmino and scores, but Shaqiri is ‘lazy’ apparently. He’s been all over the pitch! Bargain!

Huge ovation for Shaqiri. He deserves that. He's been outstanding tonight. That £13m fee looks like small change #LFC

Injuries seem to have taken their toll on Adam Lallana, who looked off the pace against Huddersfield and was disappointing once again after coming on for Shaqiri. He was sent clear on goal but was too slow and failed to test the goalkeeper.

With Shaqiri impressing, Liverpool's front three finding their fluency, and Naby Keita soon to return from injury, Lallana's days at Anfield could be short-lived.

RED STAR BELGRADE
Player Ratings
Starting XI: Borjan (6); Stojkovic (5), Babic (5), Degenek (6), Gobeljic (5); Krsticic (5), Jovicic (5), Srnic (5), Ebecilio (6); Ben Nabouhane (6), Boakye (5)
Substitutes: Jovancic (6), Causic (6), Simic (N/A)
Looking Ahead
Liverpool are back at Anfield again on Saturday as they host Cardiff in the Premier League, where a win will take them top of the table for at least 48 hours. They also face Arsenal before the rematch with Red Star on 6th November.
Related Topics:
Transfer News